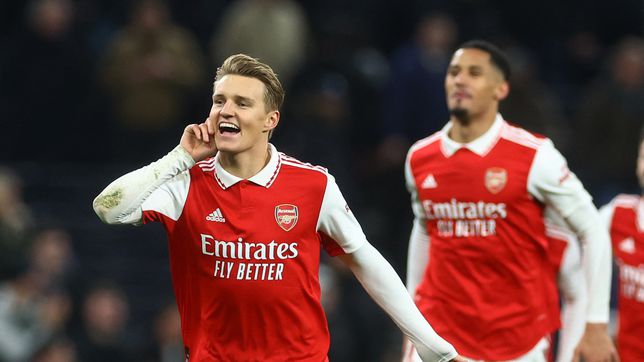 Storming Tottenham Hotspur Stadium, winning the North London Derby and increasing their lead over Manchester City in the league title race. Sufficient reasons and motivation for the Gunners They nailed their offensive performance during the first half and Aaron Ramsdale became the protagonist during the second. The English capital is red and speaks, in addition to English, quite a bit of Norwegian. Martin Ødegaard, who with his eighth goal of the season exceeds the figures he achieved throughout last season, was once again one of the leaders of Mikel Arteta’s team. The Gunners They come out winners of the derbies at the weekend: their own against Tottenham, but also in Manchester after the victory of Erik ten Hag’s pupils.

A steamroller. Not even the first 45 minutes of the match needed those of Mikel Arteta to clarify to the spurs which is the fittest team in London… and in the Premier League. A superiority that seemed to make Antonio Conte’s men nervous from the start of the game. The double error of the local defense, which was about to lead to Eddie Nketiah’s goal, acted as a trailer. A spoilers what was coming. May Bukayo Saka establish itself as the offensive bastion of the Gunners It is not surprising, but there are those who did not expect the failure of Hugo Lloris with which Arsenal took the lead on the scoreboard. The powerful cross from the English winger to the heart of the area, after rushing to the end line, hit the Tottenham goalkeeper’s chest, and the ball went inside the goal. The French goalkeeper’s complaints had no justification. The error was glaring.

Despite the fact that Aaron Ramsdale had to intervene twice during the first half against both Heung-min Son and Harry Kane, the fears of the players spurs they had already materialized with the 0-1. The goal opened Pandora’s box and Arsenal activated its most overwhelming version. At times, Hugo Lloris seemed to redeem himself from the ruling that had led to the goal Gunner. The visitors put together attack plays, one after the other, putting fear in the body of both the footballers spurs as well as those attending the Tottenham Hotspur Stadium.

Even though the left post of the goal defended by Hugo Lloris helped prevent the great goal from Thomas Partey, whose spectacular volley from outside the area shook the foundations of the temple spurs, with whom the French goalkeeper finally failed was Martin Ødegaard. The Tottenham goalkeeper won the first fight against the Arsenal captain, but not until then. Another drive from Bukayo Saka, another shot from the edge of Martin Ødegaard and another goal from the Gunners. Mikel Arteta’s men were passing over the eternal London rival in a first half marked by his own mistakes but, above all, by Arsenal’s supremacy.

Antonio Conte had to say something, and not in a low voice, to his players so that they would come out with another face on the pitch at the Tottenham Hotspur Stadium for the second 45 minutes. The spurs they stole the momentum and offensive impulse that Mikel Arteta’s men showed during the first half to try to get closer on the scoreboard. The same energy that Aaron Ramsdale put into wasting all the chances they generated in the local team. A shot from Dejan Kulusevski that went over the crossbar and a saving hand from the English goalkeeper to Harry Kane opened the recital of the international with the Three Lions In the second half. But the Arsenal goalkeeper had only just begun.

A before and after in the game was the saving foot of Aaron Ramsdale to Ryan Sessegnon’s shot. The lane of the spurs had the clearest chance for his team before game time, but the performance of the goal keeper Gunner placed it at the same level as that of Captain Martin Ødegaard. From there, the flow of offensive football from the locals decreased. Not even the entry of Richarlison, who returned to play with Tottenham after recovering from the injury suffered in the Qatar 2022 World Cup, managed to give the team another air. Mikel Arteta’s men had anesthetized the game and the brilliant exit of the spurs it had plummeted. The North London Derby was already Gunner.