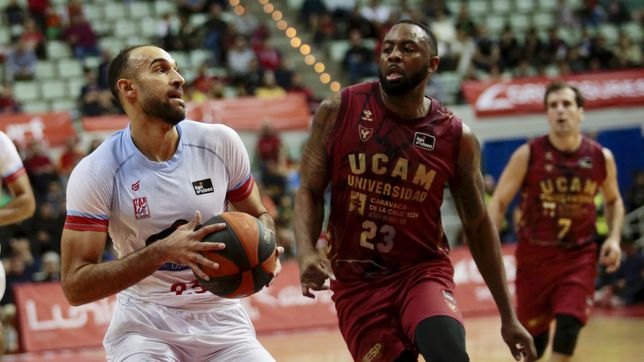 The Monbus Obradoiro achieved this Sunday third win after five straight losses in the Endesa League by winning by 80-84 on the track of a UCAM Murciawho suffered their fifth defeat (now their record is negative 4-5) in a match dominated by the Galicians from the initial whistle although they suffered at the end.

The Murcian team could finally count on Travis Trice after the strong blow he suffered to the head on Monday but not with jordans davis nor with ryan lutherwhile his opponent showed up without Leo Westermanalso injured, although he showed more determination and success at the start (3-10).

The exchange of baskets, few, and misses, many more, allowed the Compostelas to close the first quarter with an advantage (16-21) and with Phil Scrubb, acting as point guard and leading his team’s scoring with nine points in the period initial.

The domain of the team trained by Moncho Fernandez remained at the start of the second quarter and, based on triples –7/14 until then-reached his maximum income up to that moment with 16-29.

What was happening made everyone very angry. site alonsowho stopped the match with a timeout, but the maneuver did not make his team react in the first instance (18-33).

the awakening of Thad McFadden narrowed the difference, but a 3+1 from Thomas Scrubb when the score was 31-36 was a turning point. Obra reached the interval with a 4-12 run in their favor that made them make up the difference when going to the locker room with a +13 (35-48).

The third period was little success by both teams. The locals continued to be stuck and their rival took advantage of that to have their maximum advantage (39-55) and then it was the Galicians who saw the ring closed and their mattress less than half (53-60).

The final ten minutes, which started with a 53-63 score, were a psychological fight, with the home team trying to get closer and the visitors maintain control with some solvency. Five points in a row from the granas allowed them to get within five (58-63), but the Obradoiro reacted well (59-70).

The good work of nemanja radovic and a triple by McFadden, a trademark of the house, put UCAM CB squarely in the fight for the victory (72-73 with more than four minutes to play).

It seemed to be the moment for McFadden, who, with another triple, tied 75. However, the guard missed two that followed and a basket by Dragan Bender and a 2+1 by Álex Suárezall this after offensive rebounds, were key to giving the victory to an Obradoiro who commanded from start to finish even if he ended up suffering to take her away.