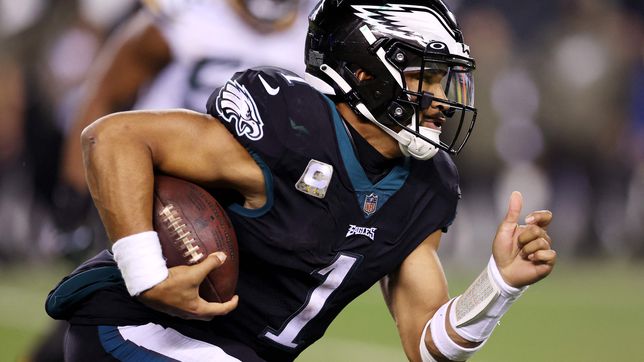 As temperatures in the United States drop with the approach of winter, the season of National Football League Heat the mold to prepare the postseason scenarios.

With two thirds of the calendar forming part of the history booksthe NFL enters its last six weeks where divisional games will capture the spotlight to structure the playoff bracket.

With some combinations of results the Eagles and Vikings could be the first to grab a berth to the postseason.

The resurgence of Washington keeps it with the best record (6-1) if we consider Week 6 as the start.

Since 1990, at least four teams each season have made the playoffs after failing to qualify the previous year.. For now Baltimore Ravens, Miami Dolphins, New York Jets, New York Giants, Minnesota Vikings, and Washington Commanders they would be contesting the postseason after missing it last year.

It may interest you: Chiefs the new betting favorites to win the Super Bowl

Philadelphia has all but clinched a spot in the 2023 NFL playoffs with its 10-1 start. Although they need to win and wait for four combinations of results, Philadelphia’s postseason options start as early as this week.

The Thanksgiving tripleheader marked the most watched Turkey Day in NFL history. According to Nielsen, the audience total was 138 million.

Week 13 of the NFL will bring with it the presentation of Deshaun Watson with the Cleveland Browns.

Jalen Hurts rushed for 157 yards to set an Eagles record for a quarterback, he also threw for 153 yards and two touchdowns and Packers quarterback

The Vikings rebounded from a beating Dallas gave them by beating the Patriots on Thanksgiving Day. Kirk Cousins ​​passed for 299 yards and three touchdowns, the last one a go-ahead score to Adam Thielen.

the Chiefs (9-2) have won six of the past seven against the Rams. They have five straight wins and are the hottest team in the AFC.

Tua Tagovailoa passed for 299 yards and the Miami Dolphins held on to a 30-point lead to earn their fifth straight victory.

Mike White threw three touchdown passes, including two to Garrett Wilson, in his first start since last season in place of Zach Wilson who was benched.

The 49ers are averaging just 10 points against on their four-game winning streak. They beat the Saints for the fourth time in a row.

The win over the Giants snapped a three-game Thanksgiving losing streak for the Cowboys (8-3), who moved one game ahead of the Giants in the NFC East.

The defending AFC champion Bengals won a rematch of their divisional playoff victory over Tennessee despite being without running back Joe Mixon.

For the tenth time in a row, the Giants fall to Dak Prescott and the Dallas Cowboys.

Since Week 6, the Commanders are 6-1, the best record for any team since that date.

Mac Jones passed for a career-high 382 yards and two scores to spice up a lagging offense against the Vikings, but they ran out of steam down the stretch.

Unbelievably the Ravens miss another game when they entered the fourth quarter with a lead.

The Titans matched their most points allowed since a Week 2 loss at Buffalo when they allowed 41.

Justin Herbert completed 35 of 47 passes for 274 yards and three touchdowns for the Chargers, who snapped a two-game skid to stay in the playoff race.

Tom Brady threw two touchdown passes, but was helpless in 10-minute overtime as the Bucs couldn’t keep up their momentum after one rest. They are leaders of the NFC South but with a losing record.

The 576 yards against the Raiders were the third-most ever allowed by the Seahawks, who fell a game behind San Francisco in the NFC West.

Arizona has lost four of its last five games, leaving it almost without a chance to make the NFC playoffs.

It was the franchise’s first victory when trailing by seven points or more in the final minute of regulation. The Jaguars (were 0-183 in those situations before Sunday.

Before giving up the seat to Deshaun Watson, Jacoby Brissett had a standout performance in the win over the Bucs.

The Falcons have now lost three of four despite topping 100 rushing yards for the 10th straight game.

The Packers not only lost the game on their visit to Philadelphia, but also Aaron Rodgers.

Carolina sits in last place in the woeful NFC South, but with the win over Denver they are just 1 1/2 games behind division-leading Tampa Bay.

The Indianapolis Colts still can’t find their way. The Jeff Saturday Effect was finished after his introduction.

The Pittsburgh Steelers got a win that only helps as a pain reliever to a painful season.

The Rams’ losing streak (5) and record at 11 games tie the 1987 Giants for worst among the defending Super Bowl champions.

Detroit missed a chance to win four straight games for the first time since 2016 and lost for the sixth straight time on Thanksgiving.

Josh Jacobs finished with a franchise-record 229 rushing yards and two touchdowns. He also had six receptions for 74 yards, and his 303 yards from scrimmage were the most in team history and the seventh-most in a game in the Super Bowl era.

The Saints hadn’t been shutout since 2001. They didn’t score two points against the 49ers.

Carolina’s defense limited Russell Wilson to 19 of 35 passes for 142 yards and sacked him three times, sending the Broncos to their seventh loss in eight games.

The Bears (3-9) started with Trevor Siemian at quarterback in place of an injured Justin Fields and couldn’t do much after their first two drives.

Houston had just 32 yards in its first 25 plays with Kyle Allen starting at quarterback in place of Davis Mills. The Texans finished with 210 yards of total offense, most of which came in the second half when they scored 15 straight points.