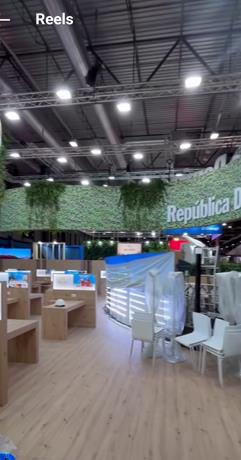 Can you imagine yourself on a Dominican beach while at the tourist fair in Madrid? Well, it will be possible.

If you visit the Dominican stand at the International Tourism Fair (Fitur 2023), located in the 3CO1 pavilion of the IFEMA fairgrounds, it will make you feel on the beach or remember that you are within the natural wealth of a destination in the Dominican Republic and, all this, thanks to the technology and ingenuity of its designer as well as the requirements of the Ministry of Tourism headed by David Collado.

Three-dimensional screens are being placed. Minister Collado just set foot on solid ground after his plane trip to Madrid from the Dominican Republic and according to his “feels” posted on Facebook’s social networks, he was already supervising the new stand. It is an “immersive” space (virtual or augmented reality that allows you to live a real experience through a digital replica).

In a cubicle that is still being worked on, the final touches are being given for its inauguration tomorrow, Wednesday, where a large number of people are expected. In fact, the Dominican stand has always been the center of attention. Last year it was awarded as the best of the fairgrounds by IFEMA. The architect is the same: Elisa Ortega, a Dominican who focuses on what is.

There are 52 participants at the RD stand. This says a lot about the number of tourism companies interested in the thriving sector of the economy and its dynamism.

The Dominican Republic also won recognition in 2022, which was granted by the World Tourism Organization (UNWTO) as the first country in the world to achieve tourism recovery after the pandemic.

According to data from the Central Bank, the Dominican tourism industry in 2022 has positioned the country as the country with the fastest recovery worldwide after the effects of the Covid-19 pandemic on international passenger traffic, as was recently pointed out by Forwardkeys, a travel business operational intelligence company, and previously by the World Tourism Organization (UNWTO).

In the 2022 edition, more than 111,000 people attended, 73% of these professionals, in addition to more than 33,000 registrations virtually, explains the Banco Popular Dominicano, leader of Dominican tourism for more than three decades, in its institutional press release.

Last year the Dominican Republic was the guest country and the official delegation was attended by the President of the Republic, Luis Abinader. It was estimated that a total number of closed deals exceeded USD$2,000 million, and the country was awarded the best stand by the authorities of the fair.

This year the partner country is Guatemala.

The country’s slogan is “Dominican Republic has it all”. And, it is so, because it is a country with mountains, rivers, sea, beaches, adventures and a climate so varied that it can feel heat of up to 40 degrees in one area and less than 4 in another, such as this winter. in the community of Constanza.