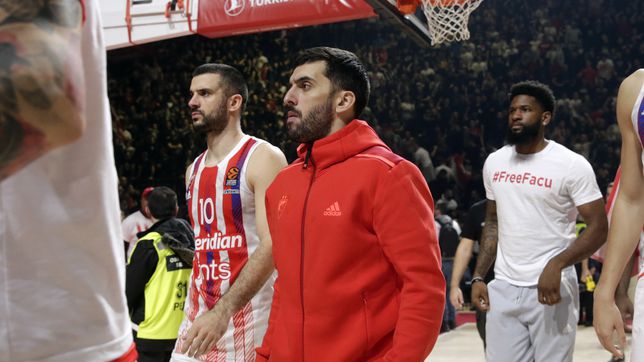 New setback for Red Star in the Campazzo case. The Court of Arbitration for Sport (CAS) has dismissed the precautionary measures requested by the Serbian club about the sanction imposed by the Euroleague Financial Panel, which prevents him from registering new players and coaches until next February 28, according to reports eurohoops.

With this decision, The point guard (31 years old and 1.78 m) has two windows open to make his Euroleague debut with Red Stara group for which he signed on December 19 for two seasons after a last attempt to succeed in the NBA with the Dallas Mavericks: he only played 8 games for a total of 52 minutes before the Texan franchise made its cut-off option effective. the player on November 28.

The two ways of Campazzo

The first way is the formal appeal of the club to the CAS before January 23 to challenge the opinion of the Euroleague Financial Panel, an independent competition body made up of three lawyers “who have no background and have nothing to do directly with basketball,” according to Mashall Glickman, CEO of the European competition. However, the decision of the TAS to deny the aforementioned precautionary measures does not suggest that the end will be happy in this way.

The second, and more feasible, although also longer in time, is to wait until March 1, one day after the sanction expires and the last day to register players in the Euroleague.. In that case, Campazzo would make his debut in the competition in Munich (Germany) against Bayern on March 2 on matchday 26. The albiceleste international would be available for Dusko Ivanovic, coach of the Balkan team, in the last nine matches of the tournament continental and, if they qualify, for the round of 16 and the Final Four.

And while that date arrives, the Facu continues its fine-tuning at AdmiralBet ABA. In the Adriatic league, averages 14 points (41.7% on 3-pointers), 7.5 assists and 3.5 steals for a PIR of 23.5 in the four games played, all victories, to date.

The reasons for the sanction

The Euroleague imposed the sanction on Red Star on December 1 and extended it until February 28 on January 4 for “serious violations of the Financial Stability and Fair Play Regulations.” The motives, “having past due debts with players from current and previous seasons, as well as providing false or inaccurate information, which allowed the club to obtain an undue competitive advantage and continue with its normal operations despite an irregularity”, according to the maximum continental competition. The recidivism of the Serbs, who have already been penalized twice in recent years, also weighed for a penalty to which a fine of 25,000 euros was added.

The enemies of Josep Pedrerol director of El Chiringuito