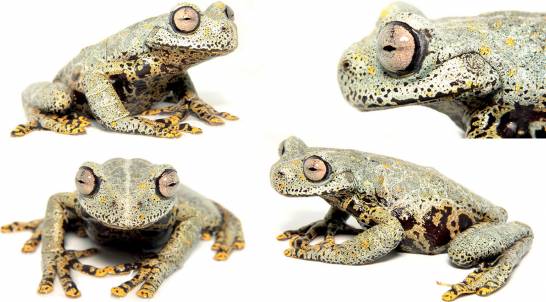 The so-called torrent frogs are a group of 40 species of amphibians that inhabit the high Andes of Venezuela, Colombia, Ecuador and Peru and Bolivia. Its name is due to the fact that its life is linked to rivers and streams of pure water in the mountainous areas of the Andes. The adults of these frogs live in the riparian forest and their tadpoles develop among the rocks of the river rapids.

These frogs live in pure water rivers and streams in the Andes mountain areas of Ecuador.

Now, researchers Juan C. Sánchez-Nivicela and Diego F. Cisneros-Heredia, from the National Biodiversity Institute (INABIO) and the San Francisco University of Quito (Ecuador), together with José M. Falcón-Reibán, from the Complutense University of Madrid (UCM), discovered and described a new species: Hyloscirtus tolkieni.

They named it after one of their favorite writers: JRR Tolkien, renowned author, poet, philologist and academic, creator of Middle-earth and author of fantastic works such as The Hobbit and The Lord of the Rings.

The amazing colors of this new frog species are reminiscent of magnificent creatures that seem to exist only in Tolkien’s fantasy worlds. Species details are published in the journal ZooKeys.

A national park in the Andes

Expeditions carried out since 2020 in the Río Negro-Sopladora National Park, a protected area recently declared in 2018 and located on the border between the provinces of Morona-Santiago and Azuay, in southeastern Ecuador, have allowed the recording of a large number of species that, like this , had never been reported to science. This national park protects large forest areas that have not yet been studied.

“For weeks we explored different areas of the Río Negro-Sopladora National Park, walking from the paramo fields at 3,100 meters of altitude to the forests at 1,000 meters. We found a single individual of this new species of frog, which we found impressive for its coloration and large size,” says Sánchez-Nivicela, associate researcher at the Museum of Zoology at the Universidad San Francisco de Quito.

We found a single individual of this new frog species, which impressed us with its color and large size.

The Rana de Torrente de Río Negro is easily distinguished from all other congeners by its large body size (65 millimeters); wide stripes on the skin of the fingers and toes; grayish green back with yellow spots and black spots; throat, belly, flanks and lower legs golden yellow with large black spots and dots; black bars and spots on fingers and toes; and a pale pink and black iris.

“The new species of frog has incredible colors and seems to inhabit a universe of fantasies, like those created by Tolkien”, describes Cisneros-Heredia, director of the Museum of Zoology. “The tropical Andes are true magical ecosystems where some of the most wonderful species of flora and fauna in the world”, he adds.

Currently, the species is only known from a single location and a single individual, so information is insufficient to assess its conservation status and risk of extinction.

Search for more specimens and locations

However, the authors agree that it is urgent to establish research and monitoring actions to study their life history and ecology, population size and trends, look for new places where additional populations may exist and assess whether threats are affecting their conservation. term, such as invasive species, mining, emerging diseases or climate change.

57% of Ecuador’s amphibian species are threatened with extinction. The description of new species is an important mechanism to support global strategies for the conservation of vulnerable environments, as it reveals the great richness of biodiversity that is linked to countless natural resources and environmental services. For example, amphibians are important pest controllers and play vital ecological roles in the stability of nature.