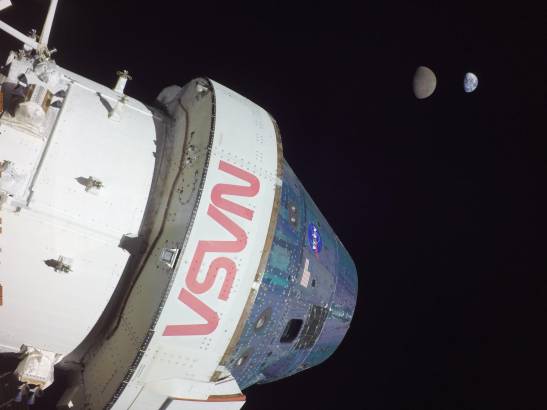 The unmanned Orion capsule, from NASA’s Artemis I mission, reached this Monday the maximum distance reached by any spacecraft designed for astronauts: 434,522 kilometers from Earth. Thus, it surpasses the distance record of the Apollo missions in the 70s of the last century, specifically, that of Apollo 13, which covered 400,171 km.

This day marks the halfway point of the journey that began in mid-November with the launch of the Kennedy Space Center (USA). At 22:06 (Spanish peninsula time) “an important milestone” was achieved with the distance traveled by Orion and its three mannequins on board, as confirmed in a press conference by Rick Labrode, Artemis I flight director.

The Orion spacecraft this Monday surpassed the distance record to Earth reached by Apollo 13 when it now moves 434,522 km from Earth, “an important milestone” for NASA

Orion, which travels at 8,200 km/h, thus broke the record for the farthest distance traveled from Earth by any spacecraft designed to be manned by humans, according to NASA.

While flying in a far lunar retrograde orbit, meaning it is far from the Moon and in orbit opposite the Moon’s path around Earth, the spacecraft continues to transmit high-resolution live images.

While several Apollo program missions sent back pictures of that area in the 1960s and 1970s, those sent back now by the Artemis I spacecraft are of higher resolution.

Artemis is paving the way for living and working in deep space in a hostile environment and ultimately bringing humans to Mars.

“Artemis is paving the way for living and working in deep space in a hostile environment and ultimately bringing humans to Mars,” NASA Administrator Bill Nelson said at the press conference.

On the thirteenth day of flight of the Artemis I mission, after having traveled hundreds of thousands of kilometers around the Moon in the spacecraft Orion, the commander of the spacecraft, the dummy Moonikin Campos, assured via Twitter that he had “a very busy journey” taking taking selfies with the Moon in the background and collecting lunar orbit data.

The mannequin, which at the same time is a superhero in a NASA comic book, is named after the American Arturo Campos, an electrical engineer of Mexican origin who was “fundamental” in saving the crew of Apollo 13.

Commander Moonikin Fields here. I had a very busy day taking selfies with #LunaTwinswriting Tweets, capturing data from lunar orbit… Unfortunately, I have to leave the #Artemis social media nerds have their account back. pic.twitter.com/pL1fc7t1RA

Last Friday, Orion entered a distant lunar orbit, where the spacecraft will remain for about a week to test various systems in a deep space environment, about 40,000 miles from the Moon, before beginning the return journey. the land. 🇧🇷

A week ago, the mission reached another important milestone, its closest lunar approach, flying just 128 km above the lunar surface.

Orion is scheduled to return to Earth on December 11th with a dip off the coast of California in the Pacific Ocean after a journey of 25 days, 11 hours and 36 minutes.

The overall objective of the Artemis program is to establish a base on the Moon as a pre-step to reaching Mars in the future. For this, after Artemis I, NASA will launch Artemis II into lunar orbit in 2024, with a crew, and the takeoff of Artemis III is scheduled for 2025, a mission in which astronauts, including a woman and a person, will step on the lunar soil.

Suryakumar accepted his mistake and won the hearts of the fans, he said after the game – Sundar came out because of my mistake.