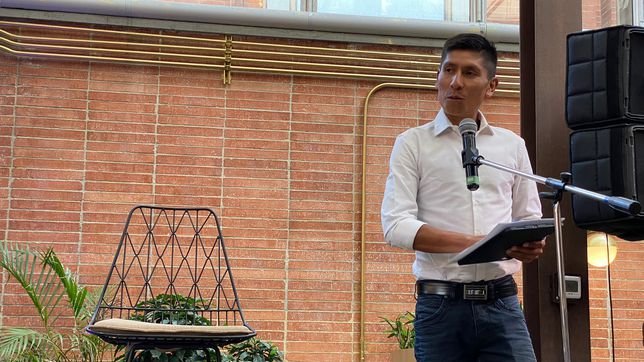 Nairo Quintana announced that he will continue his career as a professional cyclist and that he is ready to be signed by any World Tour team. The supposed consumption of tramadol in the last edition of the Tour de France was what led to the fact that for now he has not been chosen by any squad. He assured that he will not be in the national cycling championships, but that he will travel to Europe in the second week of February to define his future.

Desire and conviction, which Nairo showed at the press conference to confirm that it is still too early to retire from cycling. “Today I want to tell you that I am in good shape to continue, that due to the events of recent months, in which the rarefied environment in which I have developed is undeniable and the inexplicable wall that has been raised between the possibilities of competing and my wishes to continue doing it, I don’t give up and keep going.”said the 32-year-old runner.

Nairo remains firm with his company and study

At the press conference, Nairo Quintana not only announced that he would continue cycling. He also talked about what is coming for him at the business level.

“I take advantage of the time to also put in good change not only Nairo Quintana athlete but Nairo Quintana company. Those who know me and have had the privilege of sharing are the ones who invite me to follow. We continue forward and preparing ourselves in all areas of life I am studying. I start another semester of accounting at Sergio Arboleda where they have given us the opportunity to prepare athletes prioritizing. Our sports development and being able to have an education in parallel. I’m going in the second semester”Nairo said.

Statement from Nairo Quintana on his continuity in cycling

“The life of a cyclist, regardless of whether he is a leader or a gregarious member, a member of an important World Tour team or a humble professional squad, is synonymous with struggle.. Those of us who have been trained under the discipline of this sport in Boyacá, Antioquia, Cundinamarca and many other parts of our country, are fighters. And all of us, regardless of our achievements, have dedicated a large part of our existence to fighting against adversity.

I am not the exception. I consider myself a fighter Above all, it recognizes in Colombian cycling men and women who overcome all kinds of circumstances: poverty, inequality, discrimination and injustice.

My career as an amateur in Boyacá, as a professional in the team that opened the doors for me, Colombia is Passion, and later in Europe in the Movistar Team and Arkea Samsic squads has always been public.. I have always been willing to answer questions and speak out in situations that have seemed wrong to me as a person, athlete and team leader. In my sports career I have been subjected to many tests of great physical and mental difficulty, being at all times aware of the obligation to be consistent in my performances in front of the public that enjoys my victories and suffers with me in the most difficult challenges.

Thanks to the support of my coaches and teammates and the encouragement that Colombians give me, I have been able to become the Colombian and Latin American cyclist with the most titles in history, such as the Giro d’Italia 2014 and the Vuelta a España 2016. , add another 19 victories in general classifications, as well as many more stages and victories. This is the result of struggle, discipline and daily effort, as well as the motivation of an entire country.

Today I want to tell you that I am in good shape to continuethat due to the events of the last few months, in which the rarefied environment in which I have developed is undeniable and the inexplicable wall that has been raised between the possibilities of competing and my desire to continue doing so, I do not give up and continue forward.

I am a cyclist who is used to rain, cold, heat, falls and scratches, but also to get up and keep pedaling. Struggle and sacrifice are the ways I know to develop in life. I am going to continue fighting to compete and to continue on the bike until my body and my mind resist. I am an honest runner, I always have been, in my more than 260 controls in the last ten years of my career I have not had any problems. Since I have been a professional since 2009 I have respected the rules, competed with integrity and respected and honored fair play.

These moments of uncertainty have not been easy but I assume them with the unconditional support of my family.permanent support in these difficult times, and my work team that has never doubted my honesty and commitment to fair sport and the highest ethical standards in the exercise of my profession.

Although it is true that I still do not have a team, I am a cyclist who is still available to wear a jersey and give my best on the road. Without a doubt, my track record supports me. Pedaling I reminded the Colombians that it is possible to win against the best, that we can climb to the top of the podium. You are witnesses of the growth of the teams where I have been, of my strength and performance in recent years, which has allowed me to be ahead of the best and continue winning in different races.

I want to compete again, put on a number, feel the demand to respond to a team, the pain in the legs from the effort, but also the satisfaction of victory or of having given my best to the finish line, I want this, I need it because the competition is in me, but I also need a better environment to be able to be calm and focused on it.

I cannot end this speech without thanking the companies, brands and sponsors who remain by my side, firm because they know my performances and what Nairo Quintana is as a person and athlete. Also to the Colombian teams that have offered me a privileged place in their training, howeverMy interest is to continue raising the flag of the country in the great races of the world.

I want to take this opportunity to thank all my supporters and fans again. Their affection has been fundamental in these months and I have felt it in their messages on all social networks, as well as those who expressed it to me on the road in the Gran Fondo, all this fills me up and recharges me with a lot of energy. It’s nice to know that people appreciate me and appreciate what I’ve done.”