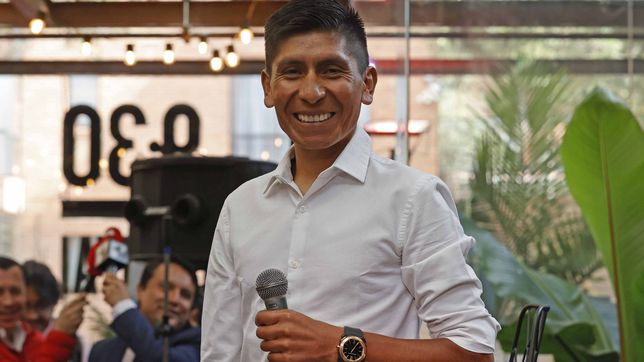 Nairo Quintana does not lower his arms and will continue running. The cyclist announced that he will continue his career and will not retire, as planned. He called a press conference and answered some questions that clarify what his future will be in the world of sports. “It is the right and perfect time to re-enter the competition,” he said.

He thanked the different teams that have offered him to run in recent months and assured that he is ready to return to the highest categories of international cycling. For that he has been preparing and it is not seen in the competitions of our country in this 2023 after being accused of using tramadol in the Tour de France.

“As I have said before, I thank the Colombian teams for giving me their hand. I think that I am still prepared to continue representing my country in the best races in the world. I am willing to be hired by a top-flight team and I keep preparing. I have to travel and sit down with them to talk about the future,” she added.

Nairo assured that he will not run in the nationals this year. His goals are set on what will be the return to Europe. “Unfortunately I have not planned it. I will be honest, I have gone through some health problems and for the nationals I will not be prepared. I spoke with the president of the federation and my intention was to have been there, but I won’t be there,” he added.

The 32-year-old rider has been preparing himself so that when the time comes to officially return to the bike, he can do so without major problems. He recalled his record and hopes to soon get out of this situation that concerns him since August last year.

“My physical condition is very good. I have prepared myself, I have been rolling. In recent years we have seen the physical condition in the best races I was in the top 10. I am going to travel to Europe, I will make a direct bridge with the different teams and talk. Solve this bump that we are going through and I hope to continue succeeding, ”he assured.

In conclusion, Nairo once again reiterated his gratitude to all the people who have accompanied him in this process and revealed that he is in the second semester of Accounting, another of the activities that he has in mind in his daily life.

“Those who know me have given me their support. The federation invites me to continue, they know how I am and they know my strengths. We move forward in all areas of life. I am studying, I start another semester of accounting at the Sergio Arboleda University”, he pointed out.