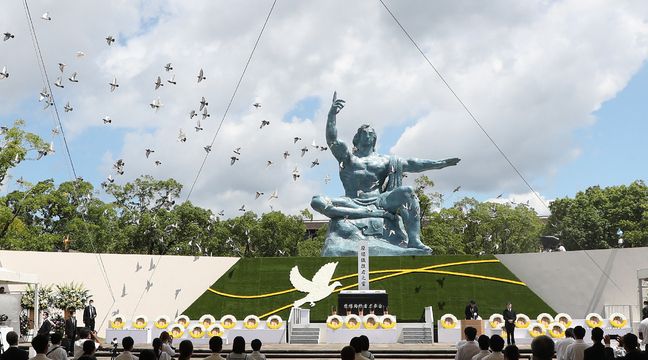 The Japanese city of Nagasaki soberly commemorated the US nuclear bombing that destroyed it 76 years ago on Monday, and the mayor called on the international community to adopt a new treaty banning nuclear weapons. On August 9, 1945, at 11:02 am, the atomic bomb dropped by the Americans killed 74,000 people, three days after the nuclear attack that swept through Hiroshima and killed 140,000.

Due to the coronavirus pandemic, and for the second year in a row, the number of people authorized to attend the ceremony had been restricted. This ceremony is the first since the entry into force in January of the International Treaty on the Prohibition of Nuclear Weapons (TIAN). “International leaders must commit to reducing nuclear weapons and building trust through dialogue, and civil society must push them in this direction,” said Tomihisa Taue, Mayor of Nagasaki. However, this treaty was not signed by the nine countries that possess atomic weapons (the United States, Russia, China, France, the United Kingdom, India, Pakistan, Israel and North Korea).

The TIAN was also not signed by Tokyo, an unwavering ally of Washington and highly dependent on US military might to ensure its regional defense. “As the only country that has suffered an atomic bombing during the war, our mission is to advance the international community, step by step, towards a world without nuclear weapons,” said Japanese Prime Minister Yoshihide Suga at the conference ceremony. .

Japan commemorated the 76th anniversary of the atomic bombing of Hiroshima on Friday. The president of the International Olympic Committee (IOC) had refused, before the opening of the Tokyo Olympics in July, to ask for a minute of silence at the Games on the occasion of Friday’s commemoration.