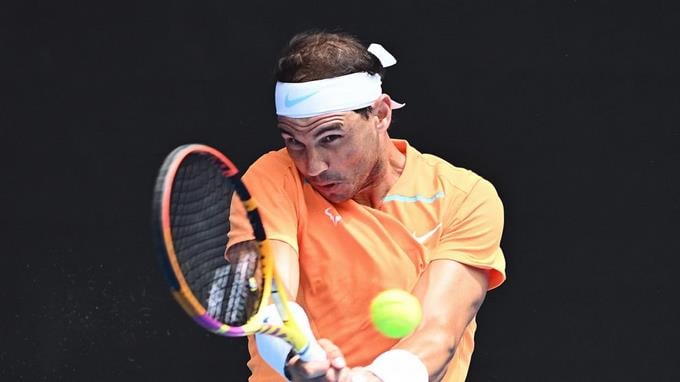 Back on the track where he became the man with the most Grand Slams in history, Spanish Rafa Nadal began his Australian Open title defense with a hard-fought victory, which lost local idol Nick Kyrgios through injury.

On the opening day of the first Grand Slam of the year, Nadal managed to neutralize the talented British Jack Draper (7-5, 2-6, 6-4, 6-1) in four sets and reverse his losing streak of six defeats in recent seven games.

"I needed the win, that’s the main thing. It doesn’t matter the way. The most important thing is the victory against a tough rival (…) one of the toughest in the first round being seeded"he later reflected at a press conference.

With a powerful first serve and the ability to respond to Nadal’s long rallies, the 21-year-old Briton demonstrated at Rod Laver Arena the reasons that led him to climb 200 places in the ATP rankings in one year to number 38.

The first set did not get unbalanced until the last game, in which Rafa displayed his left and took advantage of two drop shots to break serve and win the first set.

But at the restart, Draper was not intimidated and endorsed a double break by shooting. "Those are the games that change the game (…) I need to keep improving that"Nadal admitted at a press conference.

The balance and exchange of blows was maintained until the middle of the third set, when Draper noticed discomfort in his right thigh, which hampered his performance and forced him to seek medical assistance.

With a limping opponent, who in the end could hardly run and showed obvious gestures of pain, Nadal closed the pass to the second round where he will face the American Mackenzie McDonald.

Novak Djokovic returned to Australia after his deportation in 2022 for not being vaccinated against covid-19, Nadal is not only playing for the title, but the record of 22 Grand Slams, which the Serbian can match if he wins for the tenth time in Melbourne.

Swiatek wants the room
In the women’s draw, the current number 1 in the world, the Polish Iga Swiatek, starts as a favorite to win the title vacated by the Australian Ashleigh Barty, now retired.

On her way to her fourth Grand Slam after two Roland Garros and a US Open, Swiatek will face German Jule Niemeier this Monday, who made her suffer in the round of 16 in New York.

None of his main rivals failed.

The Americans Jessica Pegula (3rd) and Coco Gauff (7th) settled their respective confrontations with authority against the Romanian Jaqueline Cristian (6-0, 6-1) and the Czech Katerina Siniakova (6-1, 6-4).

The Greek Sakkari (6th) beat the Chinese Yuan Yue 6-1, 6-4 without excessive complications and the Swiatek executioner in the 2022 semifinals, the American Danielle Collins, suffered but beat the Russian Ana Kalinskaya 7- 5, 5-7, 6-4.

In a duel between the only two Open champions in contention, the Belarusian Victori Azarenka defeated the American Sofia Kenin 6-4, 7-6 (7/3).

In the men’s draw, the main surprise came from off the court, with the announcement of the withdrawal of the talented Kyrgios who, after years of controversy and irregular performance, seemed ready to aspire to a Grand Slam.

"i am devastated"said Kyrgios, reigning doubles champion in Australia and finalist at the last Wimbledon.

Waiting for the Russian Daniil Medvedev (finalist in 2022 and 2021) and the Greek Stefanos Tsitsipas, they advanced round the main seeds such as the American Frances Tiafoe or the Pole Hubert Hurkacz, who destroyed the Spanish Pedro Martínez with his service.

In the first tournament with the legend Roger Federer officially retired and with Nadal and Djokovic already closer to 40 than 30, a new generation of tennis players led by the absent world number 1, the Spanish Carlos Alcaraz, aspire to end at the time of "big three".

Of them, the Italian Jannik Sinner quickly secured his place in the second round, beating the British Kyle Edmund 6-4, 6-0, 6-2.

In the second round he will face Argentine Tomás Martín Etcheverry who, after four failed attempts last year, won his first Grand Slam match.

The same was achieved by his compatriot Francisco Cerúndolo, 28th seed, who eliminated Guido Pella, also an Argentine.

Bigger was the milestone for 17-year-old Chinese teenager Shang Juncheng, who became the first man from his country to win at this tournament.