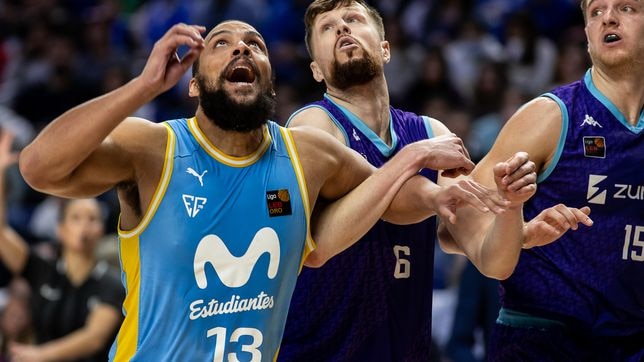 “We are one Kevin Larsen sprain away from going under.” The thinking of the Movistar Estudiantes fans has revolved around this idea since the season began. It was not for less. The Danish center (29 years old and 2.08 m) is the master pillar from which the entire team is built, one of the best players in LEB Oro: he is the fifth highest scorer with 14.9 points and third in PIR with 18.3 credits.

Very relevant figures with which the Ramireños have comfortably adapted to live since their signings at the end of December 2021 due to Darel Poirier’s injury. Because he has always been there. It was never missing. From his debut against Básquet Girona, on January 16, 2022, to the trip to Burgos last Saturday, The Nordic had played 43 of the 44 possible matches between the regular season, Princess Cup and promotion playoff to the Endesa League.

His only absence, against Gipuzkoa the previous year and not through his fault: his discharge was made days after a duel in San Sebastián scheduled for the last days of December, but which COVID pushed to move to February 9, 2022.

A streak of 38 games in a row that was broken at the Coliseum against Hereda San Pablo Burgos due to a sprained ankle. His loss, which was added to that of Hansel Atencia, was a complete loss for Javi Rodríguez, who stood up against a sore rival, in a hellish environment and after the painful defeat against Zunder Palencia with only ten players… and the coin came out expensive for the students.

With a solid collective effort, plus the inspiration of Leimanis and Jorgensen, Movistar took their 12th victory of the season. He got up from the canvas to settle in third position in the table and show that he can live, play well and win, without his great star. And also to look at this Friday’s duel against bottom team Juaristi ISB with different eyes (9:00 p.m., LaLigaSports). For the second time this season, and fourth in his two seasons in LEB Oro, the matchup will be at the Movistar Academy Magariños (3-0 record at the moment).

It will be the second duel in a row that Larsen will miss (Atencia will add the third) and The figure of Karamo Jawara (31 years old and 2.03 m), very prominent in Burgos for his quick hands and defensive positioning as well as his vision in attack, will grow. He will have to do his thing and cover the loss of his partner in the area, once his back problems have been overcome.

“We need a lot of energy, defense and intensity to play against Juaristi ISB, because it is a team with many players and they have a good rhythm; they also come from beating ICG Força Lleida, which is a very good team, therefore, we have a tough game”, assured Jawara about an opponent who is last with a record of 3-13 despite Nathan Hooves’ 17.4 points.

The dog shot the owner, killing the owner on the spot