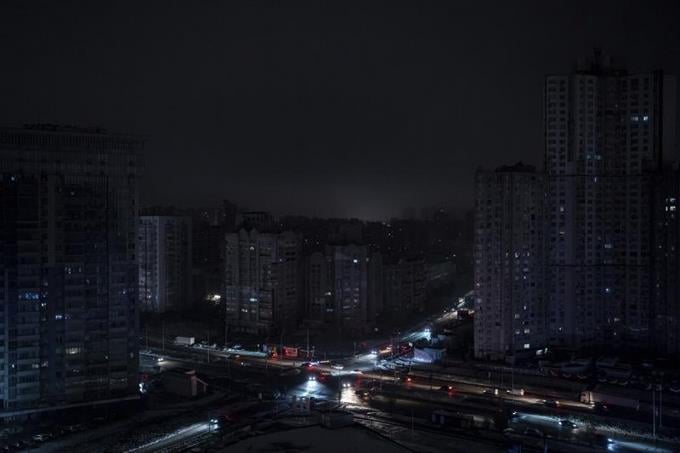 Russia launched a new missile attack on Ukraine’s battered power grid on Wednesday, leaving cities without power and some also without water and public transport, worsening winter hardships for millions of people. The airstrike on power supplies also knocked out nuclear plants and internet links, and caused blackouts in neighboring Moldova.

Several regions reported one attack after another and a series of blackouts. Ukraine’s Ministry of Energy said that “the vast majority of electricity customers” were left without service. Lviv’s trams and trolleybuses stopped running as the western Ukrainian city was left without electricity and water, according to the mayor. The entire city of kyiv was left without water, the mayor of the capital reported. Power also went out and public transport stopped in Kharkiv, said the mayor of Ukraine’s second-largest city in the country’s northeast.

President Volodymyr Zelenskyy asked the Ukrainian ambassador to the United Nations to request an urgent meeting of the Security Council.

Hours later, Zelenskyy told the Council that Ukraine will submit a resolution to condemn “any form of energy terrorism.” Referring to Russia’s likely veto, he commented that “it makes no sense that the right of veto is guaranteed to the party waging this war, this criminal war.”

“We cannot be held hostage by an international terrorist” and the council must take action, Zelenskyy said.

He also invited the UN to send experts to examine and assess Ukraine’s basic infrastructure.

“I was going up the escalator when I heard an explosion. Then the electricity suddenly went out,” said Oleksii Kolpachov, a passenger on the kyiv metro. “When I got out of the subway, there was a column of smoke.”

For weeks Russia has been attacking the power grid and other facilities with missiles and drones, causing damage faster than it can be repaired. The attacks have already affected about half of Ukraine’s power infrastructure, Zelenskyy said before the latest onslaught, and rolling blackouts have become the terrible new normal for millions of people.

Ukrainian officials believe Russian President Vladimir Putin hopes the hardships of homes without heat or electricity in the cold, dark winter will turn public opinion against continuing the war, but say he is instead strengthening resolve. ukrainian.

The Ukrainian Air Force said Russia launched some 70 cruise missiles, of which 51 were shot down, as well as five explosive drones. The afternoon attack, like the one last week, forced workers to work in the winter darkness to restore service.

In kyiv, population 3 million, the government said water and heating could only be restored Thursday morning in residential buildings.

Late on Wednesday night, the deputy head of the Ukrainian presidential office said kyiv and more than a dozen regions, including Lviv and Odessa in the south, had been reconnected to the power grid.

Moldova, with Soviet-era power systems interconnected with Ukraine, also reported extensive blackouts for the second time this month. The president, Maia Sandu, accused Moscow of plunging the country of 2.6 million people into darkness, and the foreign minister summoned the Russian ambassador to explain.

“We cannot trust a regime that leaves us in the dark and cold, that intentionally kills people out of a mere desire to keep other people in poverty and humiliation,” Sandu said.