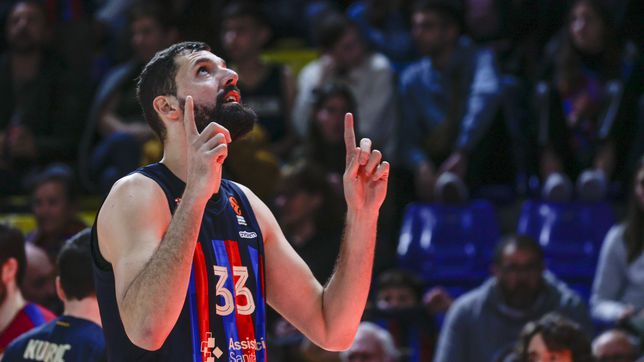 Nikola Mirotic will no longer play with the Spanish National Team. The Barça star has confirmed in an interview with Mundo Deportivo what seemed like an open secret. The Spanish-Montenegrin has not played a game with the Spain jersey since the 2016 Olympic Games and neither in his final period in the NBA nor on his return to Europe has he threatened to return to international tournaments despite the fact that there have been several from them. He is therefore a final farewell for the 2.08 player, who will be 32 years old on February 11 and will continue to be one of the most outstanding basketball players at the continental level.

“I haven’t played for Spain in many years, I’ve focused a lot on giving my all to the club I’m with. Then in summer I have many personal things, family, business… And I’m at an age, especially after having the injury and everything, where I don’t see myself returning to the National Team”, Mirotic explained, referring to the discomfort that he had been suffering from the Achilles tendon since the end of last year and that prevented him from starting the 2022-23 season on time, joining the rest of his teammates later than he would have wanted.

Mirotic has revealed that Jorge Garbajosa called him before nationalizing Lorenzo Brown to find out if he would return or not for the last Eurobasket, in which Spain won the gold medal: “I spoke with Jorge before they signed Lorenzo Brown and he asked me if I was going to return or not. He wanted to confirm that he was not going to return and that is why they went for another player”, said Mirotic, who was full of praise for the decision made by Spain, saying that “it was a great success, look how it went, they won the Eurobasket, showing once again that they are the best team and that the way they prepare is incredible”.

Mirotic played the 2015 Eurobasket and the 2016 Olympic Games with the Spanish jerseyreplacing a Serge Ibaka who was previously at the London Games as a nationalized player and having a great role with the National Team, winning gold in the continental competition and an Olympic bronze that put the icing on the cake of that Golden Generation of Spanish basketball that continues to win titles today. Mirotic has neither been in the conquest of the 2019 World Cup nor in the last Eurobasket, but he only has good words for Spain: “I am grateful for what they have done for me, for the opportunity I had to play twice for the senior teama Eurobasket title and a bronze medal at the Olympic Games”, sentence.