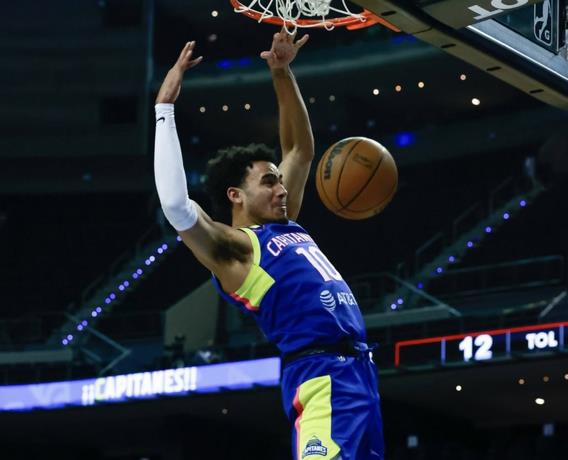 The Capitanes de Ciudad de México led by Spanish coach Ramón Díaz defeated the Santa Cruz Warriors this Sunday 128-117 and established themselves in third place in the Western Conference of the G-League, the NBA Development League.

Mason Jones, with 36 points, was the leading scorer for the Captains, the first team based outside the United States and Canada in the NBA system. The best Latin attacker of Díaz’s team was the Dominican Justin Minaya, with 19 units.

The Capitanes, who improved their record to eight wins and three losses, blew a nine-point lead due to their constant turnovers, but pressed in the final minutes and managed to tie it 30-30 in the first quarter.

The Warriors took advantage in the paint, while Mexico City dedicated itself to attacking with midrange shots, in which the Dominican Justin Minaya stood out with two triples made in the same number of attempts.

Dusty Hannahs exploded with 11 points in the second quarter and led the six made by the Warriors with three outside shots, who led 60-57 at halftime.

Minaya continued with his good offensive performance and although he contributed five more points, added to the 10 obtained by Mason Jones, the Capitanes continued with turnovers that turned into points in fast counterattacks by Santa Cruz.

Mexico City took over the paint and Mason Jones hit his first three 3-pointers as the Capitanes rallied the game and left with a slim 93-92 lead into the final 12 minutes.

Dominican Rigoberto Mendoza was the best scorer for the Capitanes in the paint with eight points, while Santa Cruz stayed in the game due to his outside attack.

Díaz’s quintet adjusted in defense and turned off the Santa Cruz sharpshooters, who did not add more triples, and with the help of 11 more points from Jones sealed the 128-117 victory.

Los Capitanes will go on tour from January 24 to 29 and will return to the CDMX Arena when they host the South Bay Lakers on February 1.

On January 24, the Captains will visit the Rio Grande Valley Vipers.

For the defeated, Lester Quiñones had seven points, seven rebounds, three assists and a block.

How harmful is cooking on a gas stove? New research by scientists