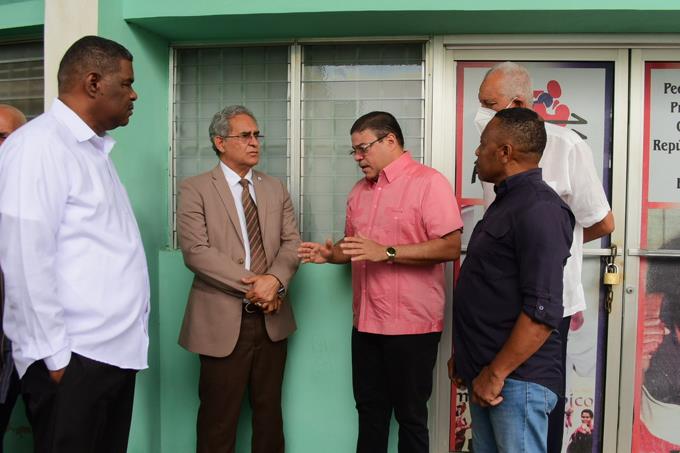 The Minister of Sports, Francisco Camacho, announced that his management will invest 34 million pesos in the complete repair of the Carlos (Teo) Cruz Boxing Coliseum, a facility that exhibits an advanced state of deterioration, and that has not been renovated since 2003 when it was The Pan American Games were held in the country.

The revelation about the repair of the facility was made by Minister Camacho, after completing his usual tour of various sports infrastructures in the capital, which ended at Teo Cruz, where in addition to observing its current state, he held a meeting with Rubén García, president of the Dominican Boxing Federation (Fedoboxa) and Bienvenido Solano, honorary president of that entity.

The official assured that the time has come to “totally rescue the so-called ‘house of Dominican boxing’, just as we have been doing with many other sports facilities throughout the national geography, on instructions from the President of the Republic, Luis Abinader” .

Camacho gave guarantees, through a statement released this Sunday, that in no more than three months the work for the rescue and total renovation of the Carlos (Teo) Cruz Boxing Coliseum will begin.

“This weekend we have toured several facilities that we understand we must repair in this management, since they have been abandoned for decades and we decided to return those spaces to Dominicans in optimal conditions to be used as they should,” Camacho said.

He explained that, regarding the Boxing Coliseum, “we have just spoken with the main executives of that federation, because the total repair and renovation of this facility is already in the tender and we are going to leave it as it was the first day it was inaugurated.”

He revealed that during the conversation he had with García and Solano, the only thing he asked them was to put all their efforts so that the coliseum can be maintained with the splendor and lucidity that will remain after the “deep repair” to which it will be subjected soon.

“I am confident that this group of men who make up the directive of the Dominican Boxing Federation will preserve the coliseum in optimal conditions once it has been repaired. This facility hurts them and their athletes more than anyone else,” said Camacho.

The minister stressed that “we were checking a group of ideas, such as the formation of a volunteer for its preservation and how this work can become self-sufficient and remain as a cup of gold.”

War in Ukraine: what to remember from the day of January 21