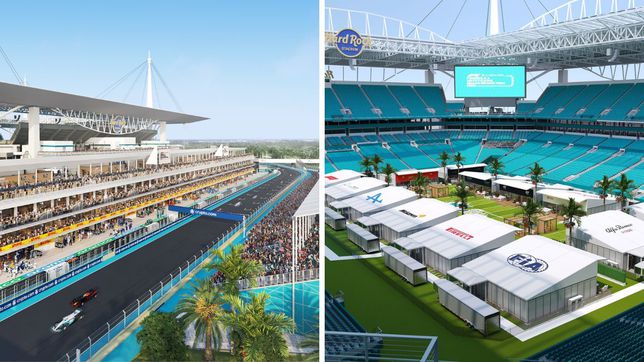 The United States raises its bet with Formula 1. Since Liberty Media took ownership of the World Cup, an expansion plan in the North American market has been marked as one of its main objectives, which in 2023 will see its greatest fruits with the incorporation of a third race in Las Vegas that promises a show for its height. But not only that… The Miami GP that premiered last year increases its investment to renovate its facilities and improve the experience left behind by an already remarkable debut.

Thus, the Florida event, the fifth of the season to be held from May 5 to 7, will have an updated image mainly in three points. The one that will most affect the action itself it is the resurfacing of the 5,412 km track, necessary to eliminate the potholes that caused so many complaints in his first time and with which they hope to improve the figure of 45 overtaking that occurred in the 2022 race in which Verstappen finished at the top of the podium flanked by the two Ferrari men.

And the other two changes will further influence the image of the grand prix. The most striking will be the location of the ‘paddock’, which will house the hospitalities of the teams on the same pitch as Hard Rock Stadium that presides over the circuit and in which the Miami Dolphins play their NFL games. And it’s rising too a luxury permanent Paddock Club above the pits with privileged views of the main straight, three levels, 17,000 m2 and the possibility of accommodating more than 6,000 guests.

“Unlike any other race”

“We have been working flat out to ensure that the 2023 event is an even better experience,” he declares. Tyler Epp, president of the Miami GP, which ensures that they are “committed to making the event the best experience of its kind, unlike any other F1 race in the world”: “We look forward to our second race being even bigger and better.” With 242,955 viewers last year, Miami intends to raise the bar with the ambition of being one of the great events of the World Cup. You will have competition.

A new F1 Paddock Club is coming to the Miami International Autodrome this May! 🚨

With unparalleled views of the pitlane and start/finish straight, luxury hospitality spaces, and built-in catering facilities, an ultra-premium experience is coming to @HardRockStadium! pic.twitter.com/LgvhIzGG7y