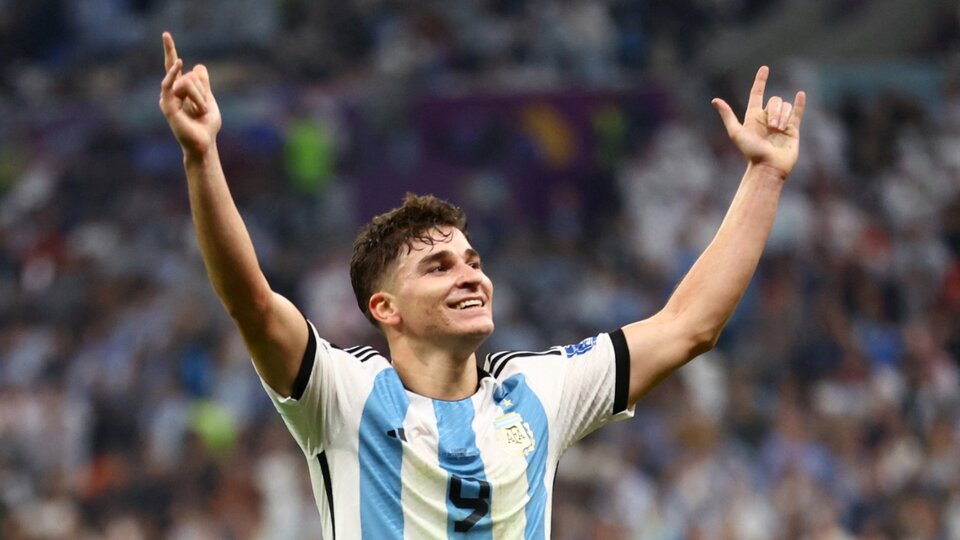 Lionel Messi, Julián Álvarez, Emiliano “Dibu” Martínez and Lionel Scaloni are part of the Argentine nomination for The Best awards that FIFA will award on February 27. But the albiceleste imprint does not stop there, since the Argentine fans and the midfielder Francisco González Metilli were also nominated for the awards that the entity has given since 2017.

Messi and Álvarez share the roster for the male player, while “Dibu” Martínez and Scaloni will compete for the best goalkeeper and coach, respectively. FIFA also rewards the best fans and the Argentines who traveled to the World Cup in Qatar will compete with the Japanese and an Arab who crossed the desert to see his team in the World Cup.

In addition, midfielder Francisco González Metilli is on the list for the Puskas Award for the best goal for the goal he scored with Central Córdoba from Santiago del Estero to Rosario Central, on August 1 of last year, at Gigante de Arroyito.

Messi, chosen as the best player of the Qatar 2022 World Cup, will go for his second The Best award for best player but was present in all the nominations. In the first edition, which was delivered in 2017 but corresponded to 2016, the Rosario star lost the vote to Cristiano Ronaldo and the same thing happened the following year. In 2018 he was left out of the finalists for the first time, he won it in 2019, in 2020 he came third and in 2021 he came second behind Pole Robert Lewandowski.

The captain of the Argentine team world champion shares the payroll with Julián Álvarez and twelve other footballers. Messi appears as the main candidate since the 2021/22 season will be taken into account and what happened until the end of the World Cup. The other competitors will be English Jude Bellingham; the French Karim Benzema and Kylian Mbappé; the Belgian Kevin De Bruyne, the Norwegian Erling Haaland, the Moroccan Achraf Kakimi, the Brazilians Neymar and Vinicius Junior, the Croatian Luka Modric, the Polish Robert Lewandowski, the Senegalese Sadio Mané and the Egyptian Mohamed Salah. If there are no surprises, Messi will be a finalist with Mbappé and the podium would be completed by Benzema -winner of the Ballon d’Or- or Haaland, who stood out with an impressive record of goals when he arrived in the Premier League.

Starting this Thursday and until February 3, fans will be able to vote in each of the seven categories and then the three finalists will be announced. In addition, the votes of the coaches and captains of all those selected from the federations associated with FIFA, and a group of journalists will be taken into account.

Scaloni, coach of the national team, was nominated for best men’s coach along with four other renowned colleagues: Carlo Ancelotti of Italy, Didier Deschamps of France, Josep “Pep” Guardiola of Spain and Walid Regragui of Morocco. After the recognition of the IFFHS, the DT from Santa Fe will try to be the first Argentine to win the award that already had Mauricio Pochettino (2019) and Marcelo Bielsa (2020) as nominees.

Emiliano “Dibu” Martínez, who won the Gold Glove in Qatar 2022, also aspires to win The Best award for best goalkeeper. His competitors are the Brazilians Ederson and Alisson Becker; the Moroccan Yassine Bounou and the Belgian Thibaut Courtois.

The surprise of the nominations was González Metilli, who with his volley at the Gigante de Arroyito was among the eleven best goals. They will also fight for the Puskas -which Erik Lamela won in the last edition- Mbappé’s second goal in the World Cup final against Argentina; and Richarlison’s goal against Serbia.

FIFA also rewards the best fans and the Argentines who traveled to Qatar won the nomination. “The journey from Argentina to Qatar is not exactly short, but ‘Albiceleste’ fans have flocked to Doha since the start of the championship to support Lionel Messi in his latest attempt to win the only trophy that remained elusive. until then,” FIFA said.

The other chosen ones were the Japanese recognized worldwide for cleaning the stadiums after each game; and Abdullah Al Salmi, a fan from Saudi Arabia, who walked 55 days through the desert to see his team at the World Cup.