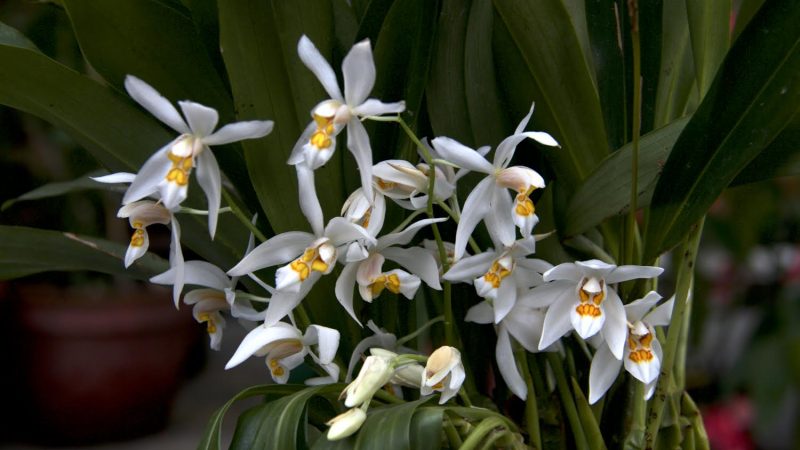 Wild medicinal orchids are part of Chinese medicine along with other plants. It is a tradition that goes back thousands of years.

In general, orchids are consumed alone or mixed with other herbs in infusions or soups. Health benefits vary by species. Some are found to have properties for boosting the immune system, hypertension and stroke.

Many of these medicinal orchids are among the more than 40 species of the genus Dendrobium. In recent decades, the supply of orchids Dendrobium wild-derived drugs have declined considerably and some species are already hard to find.

This is happening in the limestone regions of Guizhou and Guangxi, the main area where Dendrobium grew naturally, due to a combination of overharvesting by collectors and habitat loss.

I am an ecologist and lead several research projects in southwest China, where the country’s first orchid nature reserve is located in an area with a great diversity of orchid species. In 2017, China published a Biodiversity Red List of endangered species found within its borders.

In that list, it included 68 endangered species of Dendrobium, but did not mention overexploitation as a factor in its decline. Other researchers and I have shown that the wild orchid trade is very active in China.

In my opinion, the Chinese Red List of Biodiversity significantly underestimates wild harvesting as a threat to orchids.

The government has taken encouraging action on this issue, but its actions pose challenges for the conservation of many wildlife species, such as balancing use and conservation.

The Destiny of Orchids Dendrobium of China offers clues to what China is willing to do to conserve its many endangered plants and animals.

Wild medicinal orchids are often collected by farmers for sale to middlemen or in rural markets. The plants are then transferred to large medicinal plant trading centers or markets in major Chinese cities.

Total trade volumes for medicinal orchids are not well documented, but likely vary by species. Although available records show that trade in medicinal species from Dendrobium it peaked in the late 1980s at around 660 metric tons per year.

The most recent evidence suggests that the Dendrobium The wild drug is traded across borders between China and Southeast Asian countries. This is likely because plant populations are declining in China.

While China faces many well-known sustainability challenges, it is working to position itself as an environmental leader. This is especially true for wildlife protection: in 2019, China sought and won the role of hosting the Conference of the Parties to the United Nations Convention on Biodiversity scheduled for 2021. That meeting, originally located in the Chinese city of Kunming, was held in Montreal in late 2022 after several delays due to COVID-19.

Orchid conservation actions reflect this impulse. On September 7, 2021, China published a revised list of top national protected wild plants, which included about 1,100 species. The new list added 291 species of Chinese wild medicinal orchids, in stark contrast to the previous version, which did not protect any orchids.

The 96 species of Dendrobium chino are on the list, which means that their collection is subject to national regulations on the protection of wild plants. It remains to be seen how effectively these rules will be enforced.

China has also encouraged the production of commercially valuable animals and plants on farms to meet market demand and reduce pressure on wildlife. For orchids and many other species, this strategy has produced mixed results.

Growers are now growing orchids Dendrobiumincluding Tie Pi Shi Hu (D catenatum), one of the fourfairy herbs” which are documented in ancient herbal books. This process is carried out mainly in industrial greenhouses. In 2020, China produced 33,000 metric tons of orchids Dendrobiumwith an estimated market value of ¥12 billion RMB, or about US$1.7 billion.

This production has only partially met market demand, and orchid consumers see cultivated orchids as an inferior option. As a result, these plants have a much lower market price than their wild counterparts.

gastrodia elata, an endangered orchid used in traditional Chinese medicine, is a good example. Artificial mass culture techniques for this species were developed as early as the 1980s, but did not end with wild collection.

Orchids grown in the forest

An alternative would be to ban the use of these endangered orchids. But banning the use of other wild species produced different results. Depending on factors such as market demand and the biology of the species, bans may not be necessary or desirable.

It has been more productive for China to complement the mass cultivation of orchids by growing high-value medicinal and edible plants under the canopy of well-managed native forests. These forms of cultivation, which we might call “grown in the forest”, are environmentally friendly because farmers can adopt harvesting methods that allow the plants to persist. Ginseng grown in US forests is an example of this approach.

Cultivation of Dendrobium grown in forests, it is now popular in Guizhou and Fujian provinces. The provincial government is promoting this as a way to reduce poverty.

Forest farming helps growers save money by eliminating or reducing the need for pesticides. In turn, chemical-free farming allows them to sell their plants in organic and other niche markets. It also helps conserve target species and the forests they grow in, as well as preserving the diversity of native forests. Promoting forest agriculture can generate interest in forest management and raise awareness of native plants.

This strategy also has some disadvantages. Plants grow more slowly under tree canopies than in shaded greenhouses, and yields are generally lower. This means that forest products must be sold at a premium to be profitable. For now, I think these semi-wild farming operations should be considered experimental.

Conserving high-value plants while supporting local livelihoods will require authorities to think about ecological and social impacts. If China can find a way to achieve sustainable use of medicinal orchids, it could establish a conservation model for other countries facing similar challenges.

This article was written by Hong Liu, Professor of Earth and Environment at Florida International University. Republished from The Conversation under a Creative Commons license.