MediaTek continues to gain ground in the market mobile with its range of Dimensity processors which, by the way, have already given it its current dominance in this sector. Now, in fact, we have a new reinforcement in the form of MediaTek Dimension 1050your new processor.

At stake is a mid/high-end chipset with 5G connectivity in mmWave frequencies, as well as sub-6 GHz. That is, a chipset strong in connectivity, as well as in graphics and processing power for a new generation of smartphones. Android.

MediaTek Dimensity 1050 is the new chipset with 5G mmWave

More specifically, the MediaTek Dimensity 1050 is a processor eight cores with 8 processing cores built according to the lithography of 6nm. uses two cores Cortex A-78 ARM for demanding tasks, with maximum processing frequency in 2.5GHzas well as a total of six cores Cortex-A55 of ARM for the simplest tasks.

At the same time, we also have ARM’s Mali-G610 graphics card, with support for MediaTek’s own HyperEngine 5.0 technology, which consists of a suite room of optimization tools. That is, an optimized mode with several functions that improves performance during gaming sessions with more “power” for games and gaming experience. 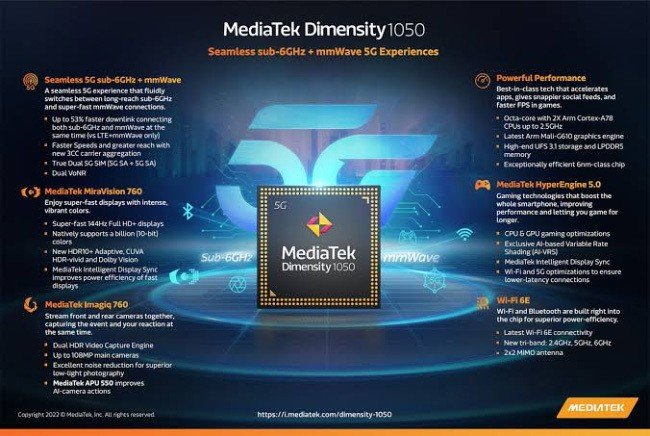 MediaTek’s Dimensity 1050 was joined by the mid-range and mid-range Dimensity 930 and Helio G99, respectively, with a strong focus on 5G. Indeed, connectivity is one of the bastions of the new MediaTek processors to equip the next generation of Android smartphones that will hit the market during the second half of 2022.

The new MediaTek Dimensity chips are popular with OEMs and around 6 D8100-based phones are expected to ship in the coming weeks. Qualcomm seems to be falling behind, and the new SD870 could help them catch up. Expect little from SD 7 Gen 1, but it will be prominent next quarter.

Thus, in the Dimensity 1050 we have support for Wi-Fi 6E, as well as 2×2 MIMO antennas for an extremely fast Wi-Fi connection by today’s standards.

Finally, according to the company, the first batch of smartphones equipped with the Dimensity 1050 will hit the market between July and September.