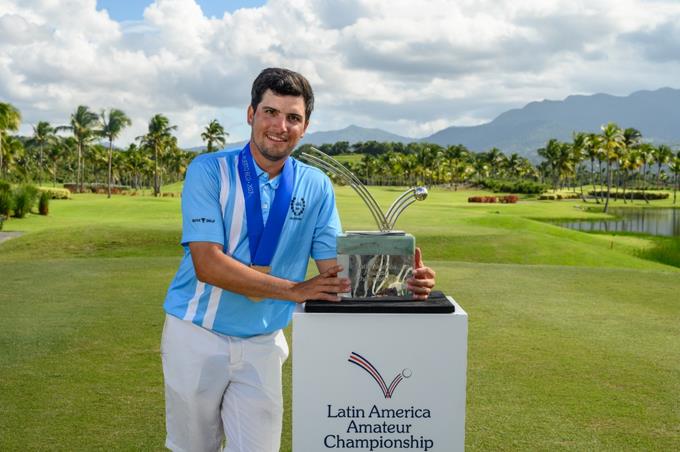 Argentine Mateo Fernández de Oliveira married glory by winning the Latin America Amateur Championship (LAAC) that was played this week at the Grand Reserve Golf Course in Puerto Rico. The tournament, organized by The Masters, the USGA, and the R&A, celebrated its eighth edition on La Isla del Encanto playing on the design of the American Tom Kite, a course that has also hosted a PGA Tour event, the Puerto Rico Open, since 2008.

Fernández Oliveira, who turns 23 this Monday the 16th, received the LAAC trophy in an emotional ceremony that was attended by the main dignitaries of the founding organizations of the event: The Masters (Fred Ridley, Chairman Augusta National), the R&A (Martin Slumbers, Chief Executive), and the USGA (Mike Whan, CEO), as well as other executives from those organizations. With his victory, Mateo becomes the second Argentine to win the tournament (Abel Gallegos, 2020), and the third player to win after finishing second the previous year. The other two are Joaquín Niemann (2018), and Alvaro Ortiz (2019).

The champion assured to play in The Masters, The US Open and The Open this year, 3 of the 4 majors in world golf. Next year the Latin America Amateur Championship will be played in Panama at the Santa María Golf Club course, designed by Jack Nicklaus Design.