We recently wrote that video card prices seemed to be rising again after prices cooled down a bit. Jon Peddie Research published a report saying that sales fell in the third quarter, but it would be some time before the supply chain returns to normal.

In fact, the market has contracted 18.2% since the second quarter, although it is still an increase of 12% year-on-year. That would mean that high prices and shortages have made people decide not to buy a new video card. AMD’s overall market share grew 1.4% and Nvidia’s share grew 4.86%, while Intel contracted 6.2%. 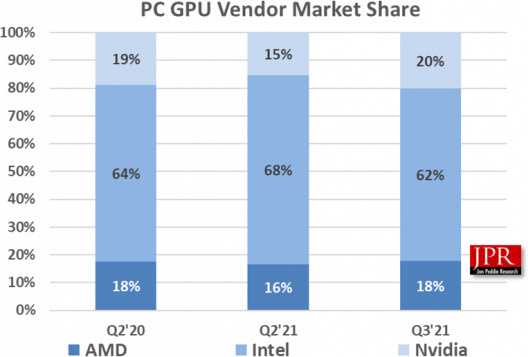 Additionally, the number of systems with a separate video card has grown 7.6% compared to the previous quarter. Surprisingly, people prefer to buy an expensive video card than a chip with an integrated GPU. So it could be that APU sales have fallen more than video card sales as the video card market has shrunk. The total “retention rate” is now 125%. For this, separate and integrated GPUs are included in desktops, laptops, and workstations. At 23.1%, the CPU market has fallen further compared to the previous quarter, compared to last year is still 9.2% growth.

Prices would remain high as demand is likely to remain high, the market analyst said. At the same time, the lower end of the laptop market is said to be saturated with Chromebooks, as manufacturers have amassed a large amount of inventory for these devices. The supply chain is not expected to meet demand until the end of 2022.