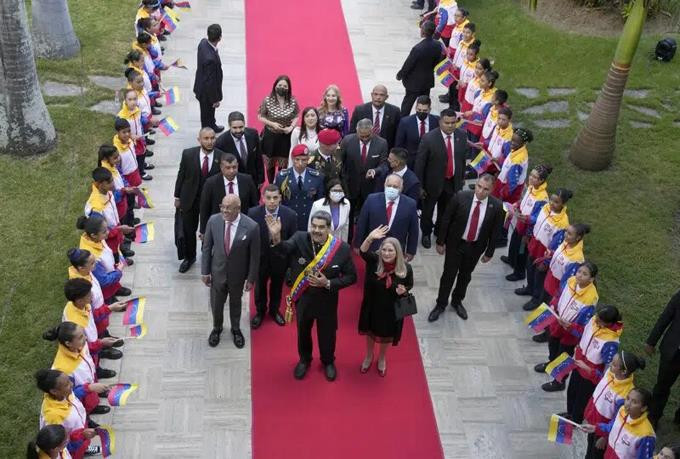 Venezuelan President Nicolás Maduro, who criticized the United Kingdom on Thursday in response to this country’s support for the opposition National Assembly elected in 2015 as the only legitimate one, spoke in his annual accountability speech of his intentions to form a bloc of forces policies with Colombia and Brazil.

With the recent political changes in its neighbors Colombia and Brazil, which elected the left-leaning presidents Gustavo Petro and Luiz Inácio Lula da Silva, Maduro will bet on “regional integration,” which he said he told them about.

Maduro intends to “advance in the formation of a powerful bloc of political forces, of economic power, that speaks to the world… to the construction of new poles of power.” His speech coincides with that of Petro, who has referred to the issue in public statements promoting the Latin American regional union to address cross-cutting issues such as climate change, trade and a change in the anti-drug strategy.

With the arrival of Petro and Lula, Caracas reestablished diplomatic relations with its neighboring countries that had been broken for years due to political differences. Colombia was during the government of Iván Duque (2018-2022) an ally of the United States in exerting pressure on the Maduro government.

On the same day that the president gave his annual speech, in which he gave an account of the previous year, Maduro responded with criticism of the United Kingdom’s pronouncement on the National Assembly in 2015. He criticized the position of the European country of only giving legitimacy to that entity that is in the hands of the opposition.

“I find it laughable, ridiculous, really that at this point they lend themselves to farce,” he said from the federal legislative palace that is the seat of the National Assembly elected in 2020 and controlled by Chavismo.

The British government in its official communication on Thursday indicated that it continues to consider that the 2015 Assembly is the “last” elected “democratically” in Venezuela, as the United States had previously stated. The United Kingdom also supported the recent decision to extend its validity for another year and supported the decision to dissolve the figure of the interim government led by Juan Guaidó, the opposition face before the international community.

“We will continue to work with our international partners to encourage the parties involved to do everything necessary for the restoration of democracy in Venezuela,” as well as the holding of “free and fair” presidential elections in 2024, in accordance with international democratic standards.” , added the communication from the United Kingdom.

The now dissolved interim government came to have the support of more than 50 countries since its creation in 2019, however, over the years it has lost support. The United Kingdom and the United States continue to support the opposition represented by the 2015 Assembly.

On Monday, the Venezuelan Attorney General, Tarek William Saab, requested the arrest, with a red alert from Interpol, of the new board of directors of the opposition Assembly made up of Dinorah Figuera, Marianella Fernández and Auristela Vásquez for the crimes of usurpation of functions, treason to the homeland and money laundering and illicit association. None of them are in Venezuela.

While the Venezuelan government showed its unity by having the presidential cabinet and the leaders of the ruling party in full attendance at the presidential speech, the leader of Voluntad Popular and opposition leader Leopoldo López dynamited the already weakened image of the opposition in a rally virtual press with foreign media.

López said that his party is no longer part of the opposition unit, but plans to remain in the National Assembly elected in 2015 as a minority in order not to give up space.

The opponent assured that the government of Nicolás Maduro maintained a “ground cable” with the Venezuelan opposition through Tomás Guanipa, who was the ambassador appointed by the interim government of Juan Guaidó in Colombia. “From one moment to the next, he appears in Venezuela empowered to participate in elections,” he added.

López, who is politically disabled and exiled in Spain after having been detained in Venezuela for five years, ruled out that his party accompany a candidacy process outside of the primary elections, since, he said, proposing a presidential one in 2024 would be absurd. “There is no voice that represents the opposition currently,” he said.

Maduro also referred to the opposition in his rendering of accounts and to the negotiation that resumed in Mexico at the end of last year. “We are waiting for them to keep their word,” he warned about the agreement they signed and which provides for the creation of a social fund managed by the United Nations that seeks to address the social and humanitarian crisis that the country is going through.

According to the head of the Norwegian facilitating team, Dag Nylander, the social fund will be financed by reserves belonging to the Venezuelan State frozen abroad. Maduro believes that they can “rescue” more than 3,000 million dollars to invest in water or electricity.

In his speech, the Venezuelan president called on the US government to lift the “criminal” sanctions it maintains against Venezuela. “Enough of the economic persecution, enough of the financial persecution. Freedom!” he insisted.

The sanctions were imposed by the United States to pressure Maduro to leave power, arguing that he was elected in 2018 in a fraudulent election.

According to Maduro, Venezuela stopped receiving oil revenues of more than 232,000 million dollars because of the sanctions. The president added that in 2019 Venezuela produced 2.8 million barrels of oil per day. According to the latest report from the Organization of Petroleum Exporting Countries, Venezuela produced 693,000 barrels per day on average in November 2022.

Maduro has remained in power despite the sanctions, the political crisis and high inflation that have caused the emigration of more than seven million Venezuelans around the world. In his speech, he assured that Venezuela is in a “stage of national renaissance” of its economy and called for the union of its citizens.

Haiti, paralyzed one day after acts of violence and great tension

7 Israelis killed in front of a synagogue in Jerusalem