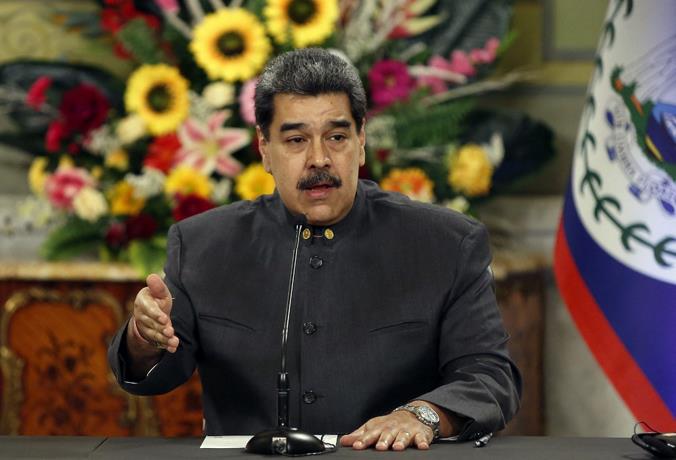 The government of Nicolás Maduro and the Venezuelan opposition signed an agreement this Saturday in Mexico to release 3 billion dollars blocked by sanctions, to which the United States responded by easing its oil restrictions against the South American country.

After the agreement, in the reactivation of negotiations after a 15-month suspension, the Joe Biden administration authorized the energy giant Chevron to partially resume its oil extraction activities in Venezuela.

Delegates of President Nicolás Maduro and the opposition agreed "make all the efforts before the authorities and institutions, national and foreign" for "obtain the legitimate funds of the Republic that are frozen in the international financial system" and use them in social projects.

They ask the UN "the design, establishment and implementation of a single trust fund" to which this money will go, according to the document, read by Dag Nylander, representative of Norway, a country that facilitates the dialogues.

resources unlocked "will be incorporated progressively as contributions to the fund"destined to health and education, to recover the deficient electrical network and to attend the emergency generated by rains that caused floods, the text explains.

The document does not specify the amount of funds to be released, but Jorge Rodríguez, head of Maduro’s delegation, says that it amounts to 3 billion dollars.

"There are more than 20,000 million dollars dammed (…). Through this agreement we are rescuing more than 3,000"said Rodríguez, president of Parliament.

The fund, said opposition negotiating leader Gerardo Blyde, "will be administered by the UN".

In a communication, UN deputy spokesman Farhan Haq said Secretary General Antonio Guterres expressed "commitment" of the organization in supporting the parties to implement the agreement.

the agreement "partial (…) opens the way to a new chapter" to advance "towards peace and well-being" of all Venezuelans, Maduro said while.

Core issues remain pending on the table, such as the next presidential elections, scheduled for 2024. The opposition is demanding to set conditions for those elections, after accusing Maduro of fraudulently re-election in 2018.

"Our mission" it is "achieve the democratic conditions for alternability to take place"Blyde insisted this Saturday.

In a joint statement, the United States, the European Union, the United Kingdom and Canada welcomed "approval" the resumption of dialogue and asked "goodwill to reach a comprehensive agreement leading to free and fair elections in 2024".

They also secured their "willingness to revise the sanctions package in the event of substantial progress on the part of the regime" from Caracas.

The sanctions unsuccessfully sought to remove Maduro from power in a country that has seen some seven million people emigrate due to its political and economic crisis, according to the United Nations.

US Secretary of State Antony Blinken posted on Twitter that the deal is "an important step towards restoring democracy".

Within this framework, the Treasury Department authorized Chevron to partially resume the activities of the company that it co-owns in Venezuela with the state oil company PDVSA, provided that it ensures that this "does not receive any income from oil sales made by Chevron".

The company celebrated the decision in a statement: "We are determined to remain a constructive presence in the country".

The State Department stressed that the other sanctions will continue to apply "vigorously".

Washington has had direct contacts with Maduro after the Russian invasion of Ukraine and has admitted that Venezuelan oil could be useful in an international market with high prices and a context of strong internal inflation due, to a large extent, to the rise in gasoline prices.

There is, however, opposition to the easing of sanctions.

Democratic Senator Bob Menéndez believes that if Maduro seeks to use negotiations "to gain time"United States and allies "they must return with full force to the sanctions"; and Republican Senator Rick Scott thinks that "there is no stage" in which to negotiate "with thugs like Maduro".

The chancellor of Mexico, Marcelo Ebrad, celebrated the agreement as "the triumph of politics" Y "A hope" for Latin America.

The Venezuelan government and the opposition began talks in Mexico in August 2021 after failed initiatives in 2018 in the Dominican Republic and 2019 in Barbados, but Maduro froze them two months later for the extradition to the United States of businessman Alex Saab, close to the government, on trial for money laundering.

Negotiations will continue in December, according to a joint statement.

Time oxygenated Maduro. Opposition leader Juan Guaidó, by contrast, has eroded since he declared himself "Acting President" of Venezuela in 2019 with the support of fifty countries, including the United States, ignoring the re-election of the socialist president.