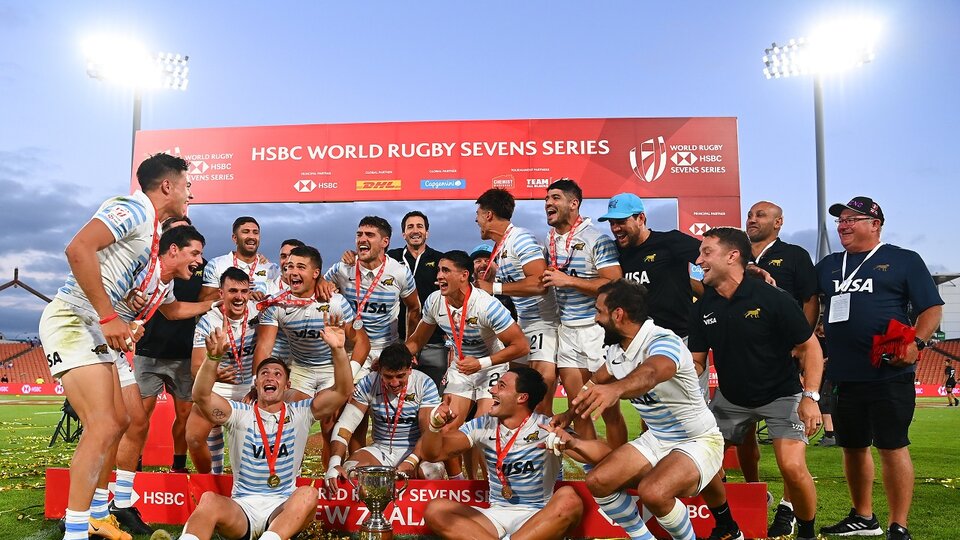 The Pumas became champions of the Sevens played in Hamilton, New Zealand this Sunday, beating the All Blacks 14-12 in the final after a remarkable comeback.

In the last play of the game played at the FMG stadium, the locals were able to win it with a ball supported in the Argentine ingoal by Brady Rush that the Portuguese referee Paulo Duarte sanctioned as knock on after reviewing the play.

The judge’s decision caused the outburst of the Argentine players, who were protagonists of the fourth consecration in 16 finals played by the World Sevens Circuit and then lifted the trophy together with the Black Ferns, the New Zealanders who defeated the United States 33-7 at the end of the female branch.

The Pumas 7s were champions for the first time in Oceania after winning the three previous times in North America: Los Angeles 2004, San Diego 2009, in the United States, and Vancouver 2022, in Canada.

The Argentine record also includes 12 silver and 21 bronze medals since the creation of the competition in 1999.

Fullback Gastón Revol, the player with the most games played with Los Pumas 7s, considered that “words are superfluous” to describe what was achieved in Hamilton at dawn in Argentina.

“We are happy. Winning a tournament is already difficult, and on top of that, doing it against the All Blacks in the final and in New Zealand, there is no doubt that it is something dreamed of. This is a historic achievement, and we are very happy,” he celebrated.

Regarding the development of the game, the man from Cordoba summarized: “We started with some small mistakes, it was a bit uphill for us, but at halftime we told ourselves to have the best second half of the year, to go out and fight, to turn it around. That’s how it was: we were able to turn around and then luckily we held on and took the title.”

To become champions, the Pumas 7s also eliminated the Fiji Islands (19-0) in the quarterfinals and the United States (24-14) in the semifinals. While qualifying for the last round in Hamilton came as second in Group D after defeating Spain (20-5) and Canada (29-14) and losing to South Africa (14-17).

Following Hamilton’s Sevens, which marked their first victory of the season, Los Pumas 7s climbed to third place in the overall Sevens World Tour standings with 59 units, behind New Zealand (63) and the United States (61).

The next stage of the Circuit, fifth of the 11 scheduled, will be held in Sydney, Australia, from Friday 27 to Sunday 29 January.

At the end of the campaign next May, the first four countries, excluding the organizer France, will qualify for the Paris 2024 Olympic Games, where Los Pumas 7s aspire to defend the podium reached for the first time in history in Tokyo.