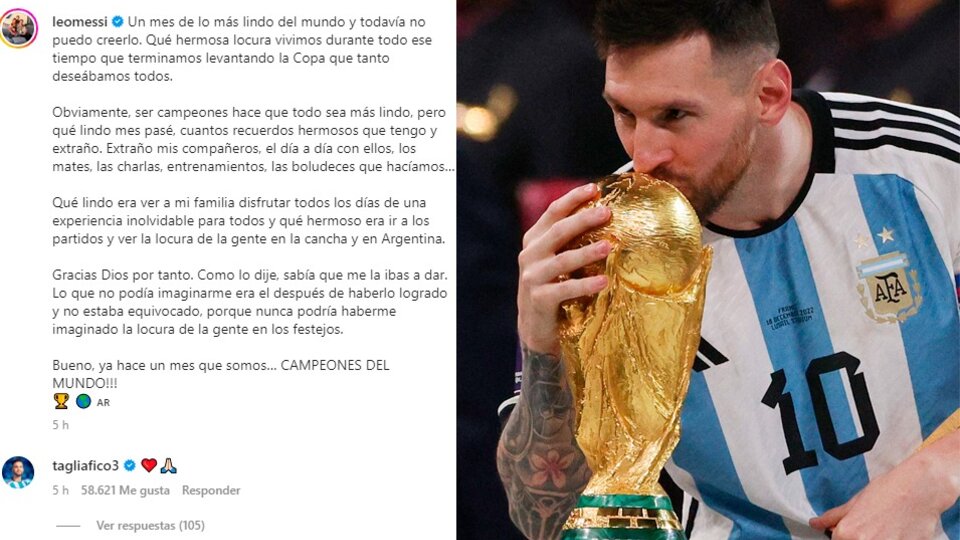 The captain of the Argentine national team, Lionel Messi, celebrated from his social networks the first month anniversary of the World Cup that the Argentine National Team achieved in Qatar. Through his official Instagram account and right from Doha where he returned with his club, Paris Saint-Germain, the star wrote some heartfelt lines to remember the unforgettable final against France together with a video with the best moments set to music with the song ” Toast” by Soledad Pastorutti.

“One of the most beautiful months in the world and I still can’t believe it. What a beautiful madness we lived during all that time that we ended up raising the Cup that we all wanted so much”Messi began and then continued: “Obviously, being champions makes everything more beautiful, but what a beautiful month I had, how many beautiful memories I have and miss. I miss my colleagues, the day to day with them, the mates, the talks, the training sessions, the bullshit we did…”, he added about that concentration at the University of Qatar.

Later, the man from Rosario dedicated a paragraph to the special accompaniment of his family in each game and to the thousands of Argentines who traveled to the Middle East to see him play the World Cup: “How nice it was to see my family enjoy an unforgettable experience every day for all and how beautiful it was to go to the games and see the madness of the people on the field and in Argentina”.

“Thank God for that. Like I said, I knew you were going to give it to me. What I couldn’t imagine was after having achieved it and I wasn’t wrong, because I could never have imagined the madness of the people at the festivities. Well, it’s been a month since we were… WORLD CHAMPIONS!!!”, completed Messi, chosen by FIFA as the best player in the World Cup.

For his part and from his home in Mallorca, Lionel Scaloni also joined the celebration of the first month and assured that “there will be nothing like it.” The world champion coach also used his Instagram account to post the following message: “One month away from EVERYONE’s dream, there will be nothing like it. Seeing YOUR people happy is invaluable. Let’s go Argentina of my life”.

In the first half hour after publication, the message already had more than four thousand comments, among which were the thanks and the request for renewal of the contract agreed with the AFA until 2026. Scaloni will travel to Buenos Aires in the next few days to close a deal with Claudio “Chiqui” Tapia”, the president of the mother house of Argentine soccer. According to reports, there would be a preliminary verbal agreement between Scaloni and Tapia, but it has not yet been overturned to paper.

War in Ukraine LIVE: kyiv deplores the “indecision” of Westerners on the delivery of heavy tanks…