Various developers have been working for quite some time to get Linux to run on Apple computers with an M1 processor. The chip is packed with proprietary technologies, making it very difficult for other operating systems to run on this hardware.

In the last few months, it had been possible to make Linux work on Apple hardware, but many parts were still not working or all sorts of software tricks had to be used.

By merging different pcie, usb-c pd and pcie links and building pinctrl driver (Apple gpio pin control), i2c driver, nvme + sart driver and dcp driver (display control), it is possible to use it as normal as a basic Linux computer. Only the video driver is not finished yet, there is no hardware video acceleration available yet. According to Héctor Martín, project manager, this is not really a problem. The M1 chip is so powerful that even without video acceleration it is faster than, for example, a Rockchip arm64 machine with hardware acceleration.

It will take some time before hardware acceleration is implemented in the Linux kernel. The M1 soc uses a proprietary GPU (probably based on PowerVR). Apple does not plan to publish any information about the chip, so the developers will have to figure it out themselves and build their own controller. Until then, users will have to settle for software acceleration. If the kernel base is stable enough according to the developers, they will release an official installer so that anyone can easily install the operating system. 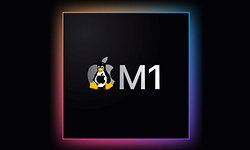 Dozens killed in bomb attack and shelling in Syria

‘Not me, but John left the Beatles,’ says Paul McCartney after...