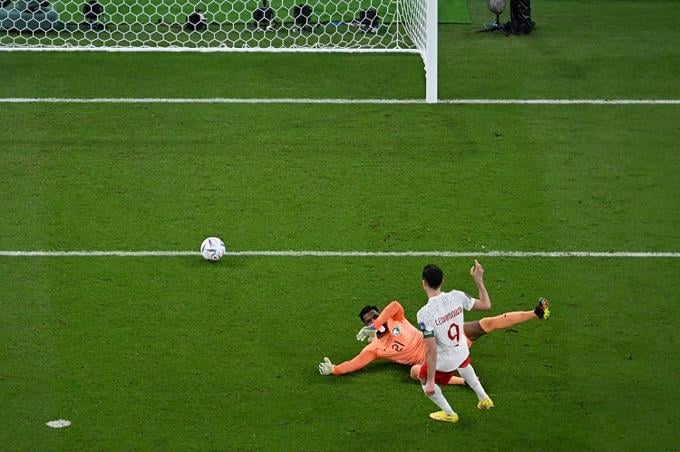 Poland defeated Saudi Arabia 2-0 on Saturday and stormed the lead in Group C of Qatar-2022 in a match in which Robert Lewandowski shed tears of happiness for scoring his first goal in a World Cup.

Piotr Zielinski opened the scoring in the 39th minute and Lewandowski decided in the 82nd minute after goalkeeper Wojciech Szczesny saved a Saudi penalty at Education City Stadium.

Poland leads the key with 4 points followed by Saudi Arabia with 3, awaiting the vital night duel between Mexico (1) and Argentina (0).

Lewandowski, who also assisted Zielinski’s goal, was moved with happiness and relief after scoring his first goal in the five games he has played in two World Cups, removing the thorn from the missed penalty in his debut against Mexico (0 -0).

Poland will have the opportunity to seal their first pass to the round of 16 since 1986 in a hectic last day of the group that will meet Argentina.

Saudi Arabia, which had given the great surprise of the tournament by beating Messi’s Argentina in its debut, sought by all means a victory that would automatically classify them to the round of 16.

The ‘Green Hawks’, however, crashed into goalkeeper Szczesny, who neutralized numerous chances including a double save on a penalty kick in first-half injury time.

Elated by their feat against Argentina, the Saudi fans packed the stands and received a gigantic ovation for their players, who went out for a victory that guaranteed them advancing to the round of 16 for the first time since 1994.

After 13 minutes, Mohamed Kanno put Szczesny to the test for the first time with a shot from point-blank range into the area that the goalkeeper suffered to clear with one hand.

In the first 20 minutes of high tension, the Brazilian referee Wilton Sampaio showed up to four yellow cards, one of them to the Saudi Abdulelah Al-Malki, who will miss the last group game against Mexico due to accumulation.

With direct football, Poland tried to break through the wings to hang balls on Lewandowski.

In a counterattack came the first Polish goal, in a run from the right by Matty Cash who crosses for Lewandowski who, instead of shooting, eludes the goalkeeper with a touch and passes back for Zielinski to finish off.

The talented midfielder, who is shining in the Italian league with leaders Napoli, celebrated his tenth goal with the national team.

szczesny savior
The goal did not change the dynamics of the game and Saudi Arabia kept hitting until in the 45th minute Bielik hit Al-Shehri from behind, who collapsed in the area.

The penalty, awarded after a VAR review, was left in the hands of captain Salem Al-Dawsari, the hero against Argentina with the spectacular winning goal.

In a fabulous double save, Szczesny flew in a spectacular dive to clear Salem’s shot and then got up in time to deflect Mohammed Al-Burayk’s second attempt.

After the break, the Juventus goalkeeper again saved Poland by clearing another shot from Salem after a commotion in the area.

Backed into a corner, Poland managed to shake off the Saudi dominance and came close to 2-0 with almost consecutive shots at the posts.

Arkadiusz Milik, a Juventus striker and a great novelty in the starting eleven, was the first to head a serve from the left to the crossbar in the 63rd minute.

And only two minutes later Lewandowski went ahead of the goalkeeper’s exit but his shot with his knee also collided with the post.

Struggling to shine in his likely last World Cup, Lewandowski found his goal by taking advantage of Abdulelah Al-Malki’s poor control in front of the Saudi box, snatching the ball from him and finishing with cold blood in a one-on-one against the goalkeeper.

The Barcelona striker, a footballer with more than 600 goals in his extraordinary career, couldn’t help but get emotional hiding his face on the pitch for a few seconds surrounded by his teammates.

The Pole still had another opportunity to expand his account against a Saudi Arabia that is already waiting for Mexico on Wednesday for one last day of heart attack.