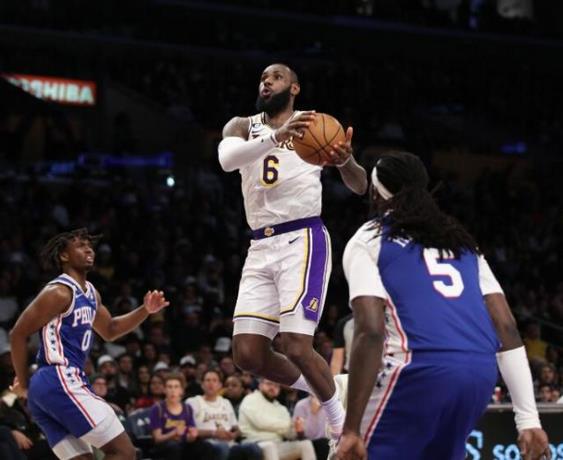 LeBron James became this Sunday the second player in NBA history to reach 38,000 points but he could not celebrate this impressive achievement with a victory as the Los Angeles Lakers lost to the Philadelphia 76ers in a very close and competitive match (112 -113).

Russell Westbrook had final possession in his hands but the point guard, without the Lakers calling a timeout in a controversial decision, lost the ball trying a pass so the Angelenos didn’t even try a shot to win the game.

That clumsy and heartbreaking outcome certified the third straight loss for the Lakers, who had just fallen in another very tight ending -and after two extensions- against the Dallas Mavericks (115-119).

The finish against Philadelphia partly marred a memorable night for LeBron, who joined Kareem Abdul-Jabbar as the only player in the NBA to reach 38,000 points.

LeBron only needed 11 points to reach 38,000 but he pulled off a monumental performance with 35 points, 8 rebounds and 10 assists.

Until his unfortunate finale to the game, Westbrook was a fantastic companion to LeBron, shining with a triple-double of 20 points, 14 rebounds and 11 assists.

In the Sixers (27-16), Joel Embiid was a titan in the paint (35 points and 11 rebounds) and James Harden supported him from the outside wonderfully (24 points, 7 rebounds and 13 assists).

The Lakers (19-24), in which the Mexican Juan Toscano-Anderson contributed 6 points and 4 rebounds, made 55.2% of their field goals but crashed once again on the outside shot (6 of 20 in triples).

Montenegrin Nikola Vucevic equaled the best mark of his career this Sunday, putting out the Golden State Warriors with a double double of 43 points and thirteen rebounds in the Chicago Bulls’ 132-118 victory against the Warriors.

Vucevic dominated with 18 of 31 shooting and five 3-pointers and guided the Bulls without DeMar DeRozan over the Warriors who arrived at the United Center as clear favorites, with their ideal quintet and with the confidence generated by Friday’s resounding victory in San Antonio before 68,383 spectators.

The Montenegrin center equaled the best scoring record of his career, which curiously dated back to a February 2021 game against the Bulls when he was a member of the Orlando Magic.

His terrific performance, backed by Zach LaVine’s 27 points, nine rebounds and six assists, allowed the Bulls to defeat a Warriors who suffered their 17th setback on the road with just four wins.

But in recent days Steve Kerr’s team, which returned to the stadium where he won three NBA titles in his playing career with the Bulls, had added valuable victories in San Antonio and Toronto.

That and the gala quintet made up of Steph Curry, Klay Thompson, Draymond Green, Andrew Wiggins and Kevon Looney, restored enthusiasm and competitiveness to those from the Bay.

However, despite the 21 connected triples, eight of them the work of Klay Thompson, the Warriors were dominated by the Bulls.

Thompson finished with 26 points and Curry, with a double double of twenty points and ten rebounds. The great leader of the Warriors made three of the ten triples attempted and caused eight of the 23 lost balls for his team.

Shai Gilgeous-Alexander and Josh Giddey each scored 28 points to lead the Oklahoma City Thunder to a 112-102 victory over the Brooklyn Nets on Sunday.

Lu Dort added 22 points for the Thunder, who won for the third straight time and improved to 21-23 at the end of a tour of the Eastern United States.

Brooklyn suffered its second straight loss since losing Kevin Durant to a strained knee ligament. Seth Curry had 23 points and Nic Claxton recorded his 12th double-double of the season – he leads the team in that stat – with 17 points and 12 rebounds.

Claxton also blocked four shots, extending his streak of games with at least three to eight. The franchise record is 11, set by Shawn Bradley, who did it twice in the 1995-96 season.

It was the second match on consecutive nights between the two teams. Portland snapped a five-game losing streak with a 136-119 win on Saturday.

The Mavericks rested star Luka Doncic, who had a season-worst 15 points in 35 minutes in Saturday night’s loss. But the setback came after a double-overtime win over the Lakers in Los Angeles on Thursday, where he saw action in 53 minutes and finished with 35 points, 14 boards and 13 assists.

Doncic has missed five games this season, all of them on the second night of consecutive games.

Doncic’s absence didn’t necessarily make things any easier for the Blazers, who finished with a mere 98-96 lead after three quarters. But Jusuf Nurkic’s 3-pointer increased the margin to 118-103 with 8:09 to play and Portland had no trouble for the rest of the game.

Spencer Dinwiddie led the Mavericks with 28 points and nine assists.

Nikola Jokic hit a go-ahead 3-pointer with 1.2 seconds left to cap his 12th triple-double of the season and Denver posted its 13th home win in a row, beating the Orlando Magic 119-116 on Sunday.

Jokic hit his shot over Franz Wagner to finish the game with 17 points, 14 assists and 10 rebounds. He has 88 triple doubles in his career.

Aaron Gordon led the Nuggets with 25 points, including a pair on free throws that gave Denver the lead with 16 seconds left. Jamal Murray added 18 points.

Markelle Fultz finished with 20 points for the Magic and made one of two free throws with 14 seconds left to tie the score at 116, setting the stage for Jokic’s shot. Wagner contributed 19 points and Paolo Banchero 18.

Down 15 at halftime, the Magic got within six points on a layup by Wagner just before the bottom of the third quarter.