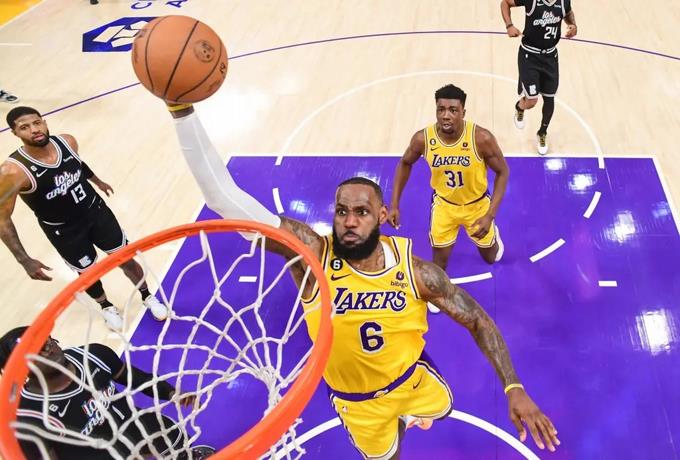 After two epic victories, the Los Angeles Lakers, despite the 46 points from a stratospheric LeBron James, returned to reality this Tuesday with a defeat against the Los Angeles Clippers, impressive with 15 three-pointers at halftime and who have already accumulated 10 consecutive victories against their neighbors (115-133).

LeBron’s team has not beaten the Clippers since July 2020 in the ‘bubble’, a particularly painful ‘curse’ at a time when the Lakers (22-26) urgently need wins.

LeBron signed a great game with 46 points (16 of 29 from the field), 8 rebounds and 7 assists and achieved his record for three-pointers in a game with 9 (out of 14 attempts).

In addition, the Lakers star became, with this recital against his Los Angeles rivals, the first player in NBA history to score 40 points against all franchises in the league.

For the Clippers (26-24), who finished the evening 19 of 38 from 3-point range and an incredible 60.7% shooting from the field, this was their third straight victory and they already seem to have put their tremors behind them in the turnaround. year (nine defeats in eleven games).

The Lakers will have reinforcements imminently since Anthony Davis, injured since mid-December, aims to return this week, and Rui Hachimura, signed Monday in exchange for Kendrick Nunn, is already in the Californian city.

A minute’s silence was observed before the game for the 11 people killed in Saturday’s shooting in Monterey Park, a city about 15 kilometers east of downtown Los Angeles.

Not even two minutes had passed when Darvin Ham sent his Lakers to the thinking corner after a 0-9 start.

Faced with 12 points from a very fine George in the initial period, the Lakers reacted with a very solid and dedicated collective work.

But the Clippers, with a great 7 of 13 from the perimeter, closed their very good first quarter with a smile thanks to a great three-pointer on the buzzer by Terance Mann (30-37).

The response of those in purple and gold was to sharpen their defense against some Clippers who had excelled with 54% shooting from the field and three-pointers.

They did not succeed and the duel ended in an exchange of blows in which Tyronn Lue’s men not only seemed comfortable but also helped them to leave on the scoreboard (36-51 with 8:30 for the break).

The uneven success in the triples was decisive: the Lakers stayed at a discreet 7 of 21 in the first two quarters while the Clippers, with all kinds of pyrotechnics from the outside, dazzled with an overwhelming 15 of 23.

With these data, no one was surprised that the Clippers sealed the first half with their biggest lead of the night (54-77, +23).

George (17 points with 3 3-pointers), Powell (14 points with 4 3-pointers), Leonard (12 points), Mann (11 points) and Reggie Jackson (9 points with 3-of-3 3-pointers) led the Clippers’ steamroller against the that not even LeBron could put up resistance despite his excellent 18 points in the first half.

The Lakers had recently made their spectacular comeback on Sunday against the Portland Trail Blazers, whom they knocked out after trailing by 25 points.

But this time there was no miracle.

With an imperial LeBron (13 points in the third period and 15 in the last period), the Lakers showed their claws and dramatically improved their defense in the restart.

Two dunks and a triple from the tireless and eternal LeBron led his team to -10 with 6.46 left to play that ignited the illusions of their fans.

But the Clippers kept their cool and sealed the win with a 0-8 run led by Leonard after a fumble between Russell Westbrook and Dennis Schroder.