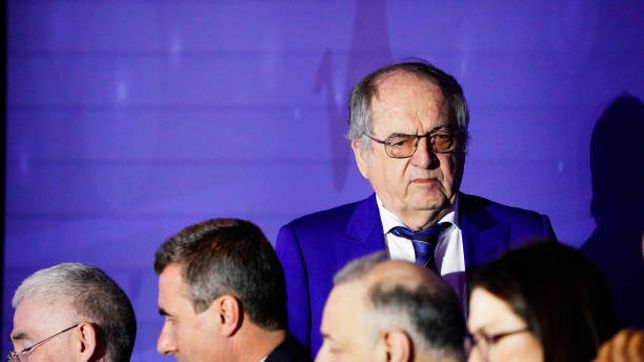 It’s over for Noël Le Graët. As announced by RMC and later made official by the French Football Federation in a statement, the president of the French Football Federation has been suspended from his position until, at least, the publication of the internal audit that began this Tuesday on alleged sexual abuse that occurred under his tenurewhich expired in 2024. Philippe Diallo, Vice President, will assume the interim position until there is a final verdict on the matter.

The FFF statement expresses the following

“Noël Le Graët, in agreement with the Executive Committee of the FFF meeting today in Paris, has chosen to retire from his functions as President of the Federation until the final communication of the audit carried out by the Ministry of Sports, and awaiting his analysis by the Comex of the FFF. The FFF Comex has also decided to fire Florence Hardouin, the FFF’s CEO, as a precautionary measure. Starting today, Philippe Diallo, FFF Deputy Vice President, will act as interim director of these two functions. Finally, the FFF Comex, informed of the terms of the extension of Didier Deschamps’ contract at the helm of the French team until 2026, unanimously validated it.

Starting at 11 in the morning, the members of the Executive Committee met with the veteran leader in an Assembly called by himself to decide on his continuity and on his latest outbursts. Present Jean-Michel Aulas, the president of Lyon, Vincent Labrune, president of the LFP and other important members of French football, the Executive Committee decided to suspend Le Graët, motivated by his disrespectful statements about Zinedine Zidane last Sunday that caused a total uproar in France. The executive body also assessed at the meeting the duration of Deschamps’ renewal, the president’s unilateral decision, his words towards Zidane and Sonia Souid’s accusations of sexual harassment during her years as a collaborator of the Federation.

After the resolution, in addition to the possible criminal consequences, Le Graët ceases to be the president of the French Football Federation with immediate effect two years from the expiration of his term. On Saturday, first thing in the morning, the federation president, without consulting the Council, renewed Deschamps until 2026, in a year in which it was not known if he was going to be in office.

Hours before his suspension, Olivier Véran, spokesman for the French Executive, had reproached Le Graët for his latest attitudes and called for sanity in the highest body of French football. Along the lines of Oudéa-Castera, Minister of Sports, who had asked her to resign during the week, the government will adhere to the decisions of the Executive Committee of the French Football Federation. The selection, for its part, enters a period of uncertainty with an international break, specifically in March, just around the corner.

More layoffs in the Federation

That of Le Graët has not been the only dismissal that the French Football Federation has made official. The highest body of French football announced the temporary suspension of Florence Hardouin, general director of the instance. Her relationship with the former federative president was, for months, tense. Although the leader had harshly criticized Le Graét’s words to Zidane, her dismissal will be valid, at least, until the final resolution of the internal audit that is currently being carried out by the French Executive.