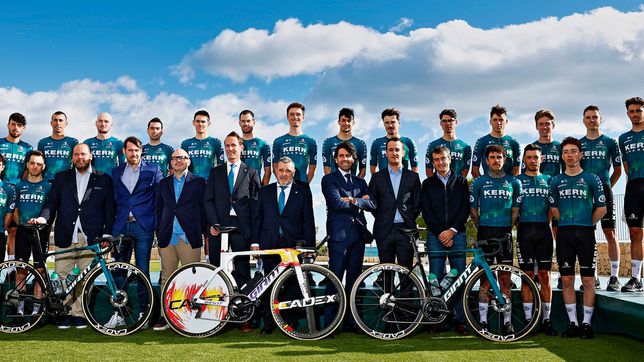 The team Kern Pharma celebrated the season’s welcome ceremony this Wednesday, Presented by former cyclist, Pedro Delgado. This presentation was the finishing touch to the intense week of training in Alicante for the cycling team and which leads to the 2023 season.

The Kern Pharma 2023 Team staff is made up of twenty two runners after the additions of Pablo Castrillo and Mikel Retegi (from its subsidiary) and that of Inigo Elosegui (from Movistar Team). Picture directed by Juanjo Oroz and Manolo Azcona will be one of the youngest of the elite, with an average of 23.5 years of age and whose objective is to feed on the promises of the Finisher Team (subsidiary).

Regarding the calendar tests, the pharmaceutical group will travel through 10 countries and will play a total of 170 days of competition, with the Spanish and French roads as protagonists. He will be debutant in the Oman Tour and Taiwan Tour, and will return to the Portuguese tests. Besides, the Volta a Catalunya and Itzulia will be attended by Kern Pharma. The Vuelta a España square they will have to fight it.

“We will have a loaded start, fortunately, with a extensive Spanish calendar, with tests of the highest category such as the Volta a Catalunya and Itzulia and major international competitions. We hope to put the finishing touch on the Vuelta a España. We fully trust our brokers, Well, we want to enjoy their performances and achieve all our objectives”, stated the manager of the Navarrese formation, Juanjo Oroz.

For his part, the president of the Galibier Sports Association, Manolo Azcona, alluded that they begin “with optimism a new season, the third as ProTeam. Convinced that the path we have taken up to now is the right one, since they have achieved the victory in important events and we have been Spanish time trial champions. Also, the image we give is good and we move people. We must continue faithful to our values ​​to become a great team”.