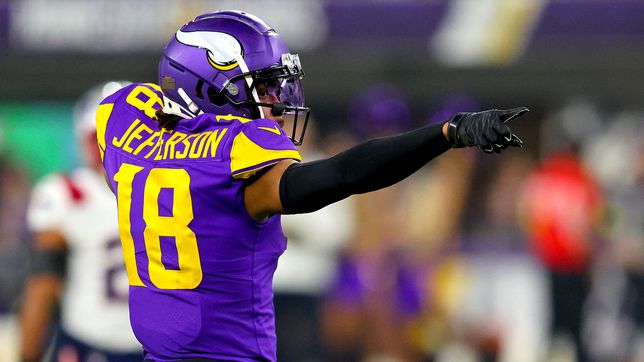 The race of Justin Jefferson In the NFL, he has had a spectacular start with the Minnesota Vikings since he was drafted with the twenty-second pick in the 2020 Draft. Now the 23-year-old has surpassed a Randy Moss record.

Before today’s game, The 23-year-old Jefferson needed only 55 yards to pass Moss’ mark for most receiving yards in the first three seasons. in the NFL it was 4,163 yards.

The Vikings wide receiver outscored Moss with a 37-yard catch with 5:08 left in the second quarter. from the game against the New England Patriots on NFL Thanksgiving Day. At that time he reached 4,186 to set the new mark.

The player with the third most yards in his first three years in the NFL is Odell Beckham Jr., who had 4,122 during his tenure with the New York Giants from 2014-16.

Justin Jefferson has passed Randy Moss & Odell Beckham Jr. for the most receiving yards through 3 seasons in NFL History

IT MAY INTEREST YOU: Matthew Stafford ruled out to face Chiefs

By achieving it in the eleventh game of the season, Jefferson will have a chance to extend his record in the last six games of the season. The Vikings will face the New York Jets, Detroit Lions, Indianapolis Colts, New York Giants, Green Bay Packers and Chicago Bears to finish out the season.