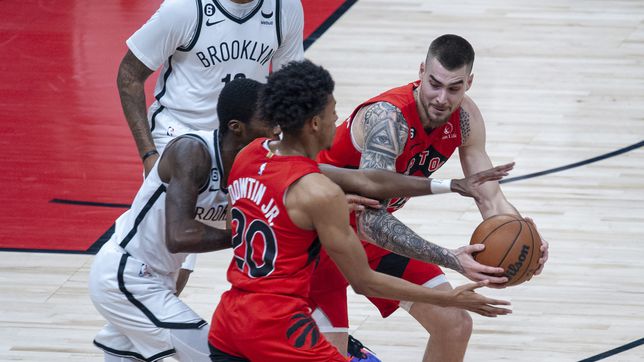 The Raptors’ ceiling is very low, although Juancho Hernangómez’s shouldn’t be that low. A true Eurobasket champion, he seems doomed to ostracism in a competition in which what you have achieved in FIBA ​​basketball does not matter much. One way or another, the younger of the champion brothers is enjoying a few minutes in Toronto thanks to injuries: Precious Achiuwa, Scottie Barnes, Otto Porter Jr. and Pascal Siakam, men who share the position with the Spaniard, are on the dike dry, so the forward has been on the track for more than 30 minutes for the second consecutive game and in the last six games he has added almost 25 on average. Not bad for a man who logged 34 total minutes in the first 12 roundsjumping onto the track in only 5 of them, surpassing double track time deficits only once and condemned to spend most of the year watching his teammates play basketball.

Things seem to have changed, at least slightly. Nick Nurse, ring champion in 2019 (with Sergio Scariolo on the bench, let’s remember), has entered Juancho, whether due to injuries or not, in the Raptors’ rotation; and the Spanish has responded to go to 5.6 points, 6.2 rebounds and 48% in triples. The Spaniard is not perfect, and he does not hit the triples (barely 27%), but he is reliable for his coach, he does enough in defense, helps his teammates and improves as the games go by: 10 points and 9 rebounds in the loss against the Hawks and 10+10 in the sum against the Nets, the fourth in the last six games for some Raptors who do not give up. He has combined in a 9 of 18 shooting in these last two clashes, he has grabbed up to 19 rebounds, 8 of them offensive and finds himself at a new level of confidence and in tune with his peers.

This is good news for Juancho, who in one way or another needs regularity, continuity and to be reliable again in the outside shot. It is the first time that he has chained two consecutive games of double figures in scoring since May 2021, when he scored 14 and 11 points against the Pelicans and Grizzlies respectively.. Something simply positive for a player who has played the 12 minutes of the last quarter and continues to add opportunities. It is probable, we know, that he will be relegated to a lower position again when the huge number of injured players from the Canadians returns (who also have Fred VanVleet in the dry dock, something that does not affect Juancho), but in the best of cases, not drop out of the rotation and continue to have the confidence of the coach when this happens it would be ideal. Neither 30 minutes, nor an eternal stay on the bench. As someone very wise said, in the middle ground is virtue. There it is.

Beyond Juancho’s situation, the Raptors lost, although they continue to live off the rents and are eighth in the Eastern Conference (9-9). Very well trained, they will compete with anyone and will do so even more when their players, essential in the rotation, recover. This time they suffered from Kyrie Irving, who continues to improve after his controversial return after his even more controversial anti-Semitic recommendation: 29 points, with 11 of 16 shooting from the field and 5 of 8 in triples, very good. Nic Claxton added again in the zone (14+12), Royce O’Neale only scored triples (5, in 8 attempts, in addition to 7 assists and 4 steals), Kevin Durant was discreet (12+7+5) and Ben Simmons continued with that strangely good version of him: 14 points, 6 assists, 7 of 9 shooting and +15 with him on court. A bit of everything in a game that the Nets resolved in the third quarter (25-39 partial for a 76-91) to get 9-10, already very close to 50% victories. And wanting more. Just like Juancho, Sure.