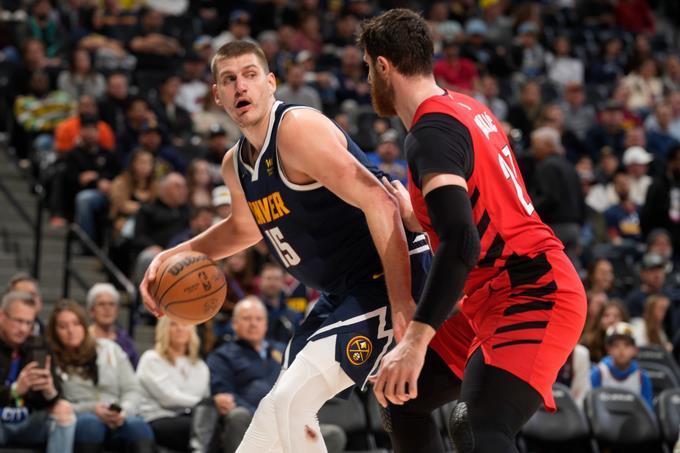 Serbian center Nikola Jokic overflowed with a ‘triple-double’ Tuesday night in the NBA for the Denver Nuggets to beat the Portland Trail-Blazer with a score of 122-113.

The work of Jokic, two times MVP, overshadowed the also overwhelming offense of point guard Damian Lillard, who finished for the Blazers with a whopping 44 points.

Jokic totally dominated the game to the point of finishing with 34 points, 12 rebounds and 10 assists, for his second straight triple-double, the 13th of the season and the 89th of his career.

The Nuggets, who extended their winning streak to seven games, remain firmly at the top of the Western Conference along with the Memphis Grizzlies, who rested on this day.

brooklyn slips
In San Antonio, the Brooklyn Nets slipped to the hosts Spurs by falling 106-98, who were badly damaged by the actions of the local Keldon Johnson, who overwhelmed with 36 points and 11 rebounds, the best of his career.

Johnson was 11 of 26 from the field, including two key baskets in the fourth quarter. He hit a 3-pointer after a missed 3-pointer by Seth Curry, giving the Spurs an 87-82 lead at the time.

With the victory, the San Antonio Spurs thus broke a streak of five straight losses. Jeremy Sochan added 16 points for the home team.

For its part, Brooklyn lost its third straight game.

The Nets have lost every game since star Kevin Durant sprained his right knee.

Power forward Ben Simmons had a triple-double of 10 points, 10 rebounds and 11 assists for Brooklyn in the opener of a five-game road trip.

TJ Warren also stood out for the Nets, who added 19 points, and Claxton with 15 points, 11 rebounds, four assists and four blocks.

Milwaukee wins without Giannis
Milwaukee once again had to go without Greek star Giannis Antetokounmpo but they pulled off a 130-122 victory over the Toronto Raptors.

Antetokounmpo has missed four straight games for the Bucks, but Jrue Holiday stepped up and stuck out his face with a big performance to guide the 2021 NBA champions to victory.

Holiday finished with a season-high 37 points with six rebounds and seven assists as second-ranked Milwaukee closed in on the Boston Celtics atop the Eastern Conference.

Milwaukee trailed 74-67 at halftime, but got loose in the third quarter to effectively seal the victory, outscoring Toronto down the stretch 38-23.

"Definitely a team effort, everyone played their hearts out and got the win"Holiday said after the game.

Joel Embiid scored 41 points and the Philadelphia 76ers rallied from blowing a 14-point first-half lead to beat the Los Angeles Clippers 120-110 for their third straight win.

Embiid grabbed nine rebounds and made 15 of 18 free throws before leaving the game with 2:53 to go. Philadelphia fans chanted “MVP! MVPs!” while he raised his arms to animate the celebrations.

Tyrese Maxey added 22 points off the bench. Tobias Harris had 20 points and the 76ers completed their sweep of Los Angeles after beating the Lakers by one point two nights earlier.

Kawhi Leonard scored 27 points to lead the Clippers. Paul George had 13 points and eight rebounds in his return after missing five straight games with a hamstring injury in his right leg. They have lost eight of 10.