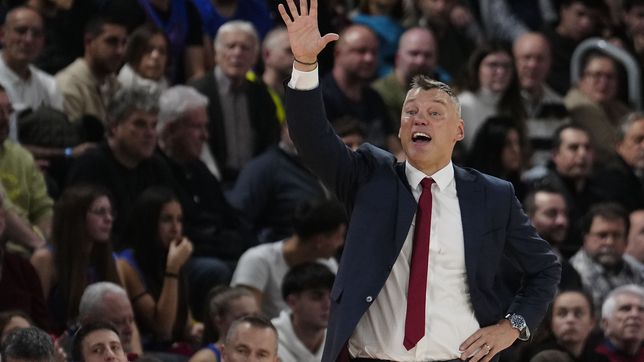 After defeating this Friday the Baskonia bucket in the Palau Blaugrana (96-84), the coach of the barcaSarunas Jasikevicius, assured that “it is very difficult to stop” the team from Vitoria, something that his players only achieved in the last quarter from defense.

“We wanted to control the game from the defense and that didn’t happen. Until the last quarter we did not find a way to stop its. In attack we found solutions throughout the game, but in defense only in the last quarter. It is very difficult to stop this Baskonia”, analyzed the Lithuanian coach from the press room.

Jasikevicius insisted on this last aspect: “I didn’t enjoy it until the last quarter. Everything we have prepared did not work. During the game we tested all the defenses several times. In the end it was a little better for us with the substitution defense and they missed some shots”.

“In the end we won from defense. More than tactics it was all about getting off your ass and defendingand in the last few minutes we have done it ”, he added.

The Barça coach praised Cory Higgins: “We are waiting for these great players, who usually perform better in the second part of the season. Cory is going further, in his line. I missed basketball. With him the only question is how he will be physically. If he gets his explosiveness back, he’ll be fine, because he’s seen it all in basketball.”

“From the beginning I asked for patience with Da Silva. It has been a very big leap in his career. But no one works more than him, not even jokubaitis. Oscar is a profile different from the other power forwards what we have. That’s why we signed him, and also thinking about the future. It will improve because it has a lot of ambition”, assured ‘Saras’ about the German-Brazilian player.

Finally, Jasikevicius acknowledged that the coaching staff and the squad spoke “a lot” about the need to “react” after the two defeats conceded against Anadolu Efes and Joventut Badalona, ​​where the Barça team “had not managed to defend”.

“We did it against Partizan and against Baskonia we managed to change the game in the last quarter thanks to defense”, he concluded.

From Suryakumar Yadav to Babar Azam, here is the complete list of ICC Awards 2022 winners