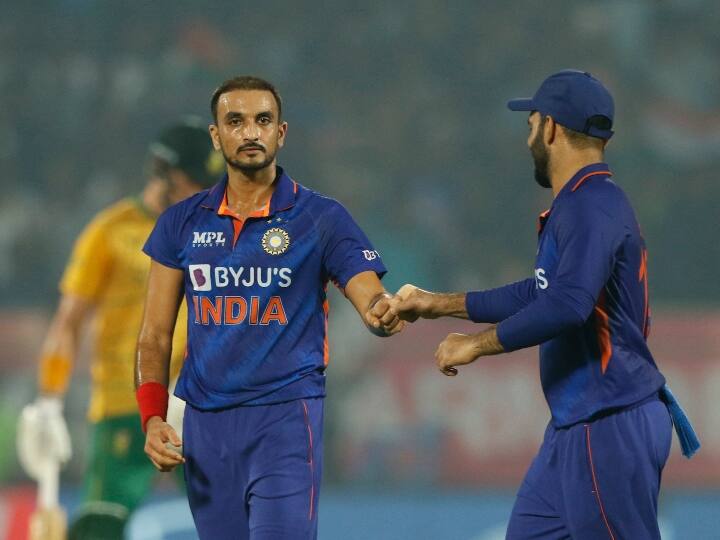 The Indian team defeated South Africa by 48 runs in the third T20 played in Visakhapatnam. With this, the five game series is down to 2-1. To stay in the series, the Indian team needed a win at all costs.

India had scored 179 runs from 5 wickets in 20 overs after playing first. In response, the visiting South African team made 131 runs in 19.2 overs. Among batsmen from India, where Rituraj Gaikwad and Ishan Kishan scored half a century. While Harshal Patel took four wickets in bowling, Yuzvendra Chahal had three hits.

Chasing the goal, the South African team scored 38 runs for the loss of two wickets on the power play. Meanwhile, captain Temba Bavuma (8) and Reeza Hendrix (23) soon returned to the pavilion. In the next over, Chahal also walked Rossi van der Dussen (1), giving South Africa a third hit for 40 runs.

In the ninth, Chahal took his second wicket by sending Dwayne Pretorius (20) to the pavilion. Meanwhile, South Africa lost four wickets for 57 runs. Still they needed 123 runs to win. After this, David Miller (3) also fell victim to Harshal, so half of the Africa team returned to the arena for 71 runs in 11 overs.

At the same time, Klaasen and Wayne Parnell attempted to pursue the target. Together they both brought the team’s score to 100 runs in 14.4 overs. But on the next ball, Chahal caught Klaasen (29). Following this, Parnell and Kagiso Rabada landed some nice shots. But in the 17th, Harshal caught Rabada (9) at the hands of Chahal, helping South Africa to 113 of seven.

Earlier, choosing to bat after losing the toss, India starters Rituraj Gaikwad and Ishan Kishan started strong and added 57 runs without dropping a wicket on the power play. During this, Gaikwad hit five straight fours on five balls off fast bowler Enrique Nortje in the fifth over. For his part, Gaikwad completed his fiftieth in 30 balls. But in the 11th, India took the first hit for 97 when Gaikwad was sacked for 57 runs from Maharaj’s ball.

Taking the innings forward, Ishaan also completed his fifty in 31 balls. But Iyer (14) was caught by the ball from Shamsi, giving India a second strike for 128 runs from 13 overs. From there, South Africa made a comeback in the match and in the next over, Ishan (54) also returned to Pavlin with the Pretorius ball. Captain Pant (6) also became a victim of Pretorius in the 16th, as India scored 143 runs for the loss of four wickets.

After this, Rabada, who came to shoot 19th, gave 11 runs to Dinesh Karthik (6). At the same time, Wayne Parnell gave up 12 runs in 20 overs, thus India scored 179 runs for the loss of five wickets in 20 overs. Hardik Pandya (31) and Axar Patel (5) remained unbeaten. Dwayne Pretorius took two wickets for South Africa. At the same time, Keshav Maharaj, Kagiso Rabada and Tabrez Shamsi each took a piece of land.

Gill told his ‘success story’ to Rahul Dravid, said this for Rohit Sharma and Virat Kohli