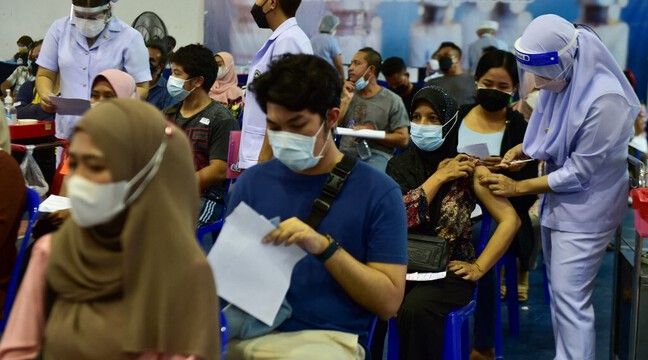 In Thailand, morgues overwhelmed by Covid-19 deaths are renting refrigerated containers to store bodies and forensic teams are on the brink of exhaustion. “The physical and mental overload is very heavy (…), some of our staff faint. We are almost at the limit of our capacities, ”says Thanitchet Khetkham, an employee at the Thammasat University Hospital morgue in north Bangkok.

Wearing a protective suit, gloved hands, a visor and a face mask, he tries, with a swab, another body that has just arrived at the service. If you test positive for Covid-19, an autopsy cannot be performed and you will be hastily cremated in a crematorium. Thanichet Khetkham’s service has been overwhelmed for several days. A container had to be rented, previously used to store perishable goods and converted to store corpses.

If this continues, “no doubt others will be needed,” the young man sighs.
Thailand, which managed to overcome the 2020 milestone with a low number of Covid-19 cases, is, like several countries in Asia, very vulnerable to the epidemic due to the Delta variant. This Thursday, about 21,000 cases were registered, unheard of since the beginning of the health crisis. 160 deaths have been recorded, the vast majority in Bangkok. Hospitals in the capital and surrounding provinces are overwhelmed.

The megalopolis of 10 million people and parts of the country are under severe restrictions and a night curfew has been imposed. But the vaccination campaign is developing slowly. Only 4 of the 70 million Thais have received two doses of vaccines and the government of Prime Minister Prayut Chan-O-Cha is criticized for its handling of the crisis. “By the end of the year, we plan to administer at least 10 million doses per month,” said government spokesman Anucha Burapachaisri.
Meanwhile, the bodies of the Covid-19 dead are sometimes left at home for several days before being picked up by overwhelmed teams.

“We must continue to do our work until we can no longer,” said Thippailin Phinjirapong, a medical examiner at the Thammasat morgue.
Urge the government to help them and provide more staff.
“The number of employees is the same as before the pandemic, but the work we do has tripled. What will happen if one of us gets sick? “, he asks.