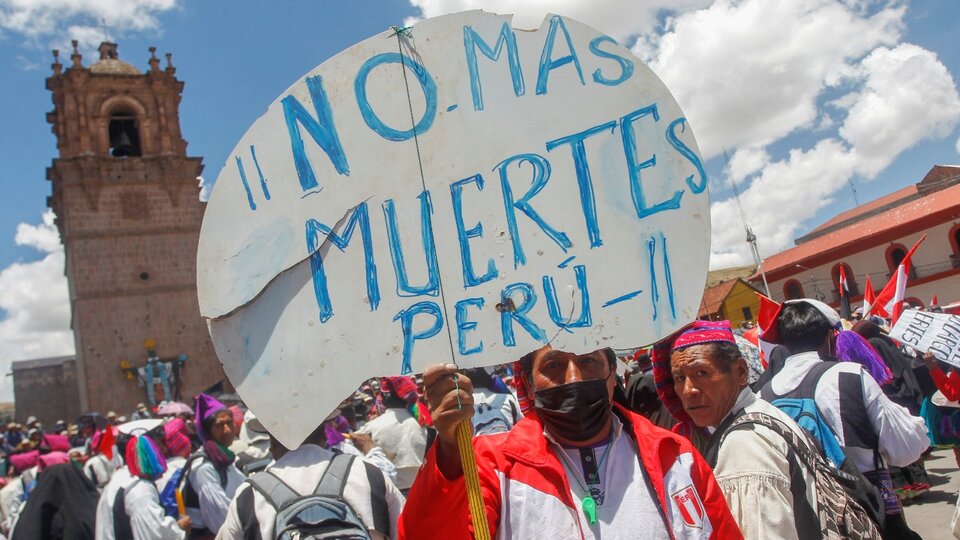 “Come on, people, damn it, the people don’t give up, damn it,” shouted the crowd in response to the tear gas and pellets fired by the police to prevent their advance through the streets of Lima. The center of the capital was taken over on Tuesday by protesters demanding the resignation of President Dina Boluarte, early elections for this year, a Constituent Assembly and the closure of the discredited Congress controlled by the right. In what has been called thegreat national march”, residents who came from different regions of the country had a leading role in this demonstration. Men and women who traveled on a long journey to Lima from different areas, especially the Andes, marched firmly. Many wore traditional clothing from their regions adding colour, determination and courage to the protest.

The center of Lima in bustle

As on other occasions, the mobilization began peacefully, until the police attacked to block their way and disperse them. The demonstrators responded by throwing stones, sticks and whatever was at hand. Plaza San Martín, a traditional meeting point for social and political demonstrations, was the central scene of the police repression, which attacked to evict those who protested. Some protesters protected themselves with homemade wooden shields in the first line, trying to stop the advance of the police.

The tear gas canisters covered the place in smoke and made it unbreathable. The police fired buckshot incessantly. It was an unequal confrontation and the police managed to withdraw them from the Plaza San Martín. The repression continued in other downtown streets and was continuing at the close of this note. Until then there was no report of injuries and arrests.

“Dina, murderer, you killed our children,” the crowd shouted as the repression intensified. “Blood shed will never be forgotten” was another slogan that sounded strong. “We are peasants, not terrorists”, chanted a group of women dressed in colorful and wide Andean skirts. A little further on, a group of young people followed them: “We are students, not terrorists.” It was the response to the government, the right wing and the media, which accuse them of being terrorists. “Friend, study, don’t be a policeman,” they chanted in front of the police officers. “Put a bullet in him,” a policeman was heard shouting. “Murderers, murderers” the people responded, between gases and noises from the shots of pellets. The demand for the resignation of the president did not cease. It was the sixth day of consecutive protests in Lima. Once again, the government’s response was repression.

This Tuesday, the epicenter of the protests was Lima, but there were also protests in inland cities. The southern Andes, where they have been daily since they resumed on January 4 after a Christmas truce, remain almost paralyzed. The Cusco airport suspended its activities and the flow of tourists was reduced to almost zero since the start of the protests.

On the Panamericana Sur highway, 290 kilometers from Lima, there were heavy clashes between police and protesters who were blocking the road. The government has recognized that a road is unblocked and then blocked again. Blockades have been maintained on different roads for weeks: there are more than 70 pickets in ten regions of the country. In certain regions there are already problems with the supply of food and fuel.

Hours before the mobilization began in Lima and the repression was unleashed, Boluarte asked the protesters for a truce. He did so in statements to the foreign press. But she herself dynamited an approach calling them “violent” and “radicals”, and accused them, without evidence, of being financed by “drug trafficking, illegal mining and smuggling, to generate chaos, anxiety and anarchy so that they take advantage of those illegal economies.” to carry out their illegal activities without control”. These accusations seek to criminalize and discredit the protests to remove their support, something they have not achieved. And they try to justify the repression that has left 46 dead by shots from the police and the military. The total number of deaths since the protests began in December is 56, including a policeman. Boluarte once again defended the security forces accused of shooting at protesters. Under these conditions, his request for a truce had no chance of success. Shortly after that failed request, the streets of downtown Lima resounded with the cries of “Dina assassin, resign.” And the repression was unleashed again.

The fake of the Bolivian bullets

Faced with the evidence that her government commits to brutal repression, the president rehearsed an explanation that once again revealed the ease with which the government launches unsubstantiated accusations. She accused the protesters of having caused the deaths by shooting “bullets that have entered from Bolivia”. There is not a single evidence of the existence of these supposed Bolivian bullets. He assured foreign media that they had videos proving his serious accusation and that they would hand them over, but that did not happen. “You have to determine where the bullets are from. If they are from the police or from the side of the violent and radicals”, insisted the president. The truth is that the 46 dead and dozens of wounded by shots are all protesters, there is not a single policeman killed or injured by these supposed “Bolivian bullets” that the government claims have been fired by the residents who protest in the southern Andes. No photos or videos show protesters armed with rifles or pistols. And the known results of the autopsies on the victims confirm that the projectiles that killed them correspond to the type of weapons used by the security forces. Coinciding with the extreme right, Boluarte accused Pedro Castillo of promoting “violent protests” from prison. Again, he didn’t show a single piece of evidence.

The Andes in the fight

The anti-government mobilizations have a strong Andean presence. The highland region of Puno is the epicenter of the largest protests and the harshest repression. More than twenty people have died there. Boluarte acknowledged that Puno has been paralyzed for weeks and that the protest is almost total in that region. And he released an unfortunate but revealing phrase, which reinforces that feeling of exclusion of official Peru against the Andean world. “Puno is not Peru,” she launched. Statements like this fuel popular outrage in Andean regions that have risen up against official power, now in the hands of the far-right that governs with Boluarte, and against the historic discrimination against them.

Valentina Churqui, a peasant, came to Lima from Puno to join the protests. “I am here because the police have killed my children, my grandchildren, that is why we Puno residents are here in the fight in Lima. There are dead who have disappeared, there are more dead than they say,” he told Página/12 with obvious emotion. He assured that they will not stop the protests until Boluarte resigns. “She says that we are ignorant peasants, we are not ignorant, she is ignorant, she does not understand what we are fighting for. What are we going to talk about if she doesn’t value us. We want respect, recognition of our work. If they are going to kill us, let them kill us all, we are not afraid”.

‘Poor man’s leg is breaking’, Mouni Roy shared such a photo with her husband Sooraj, users began to enjoy