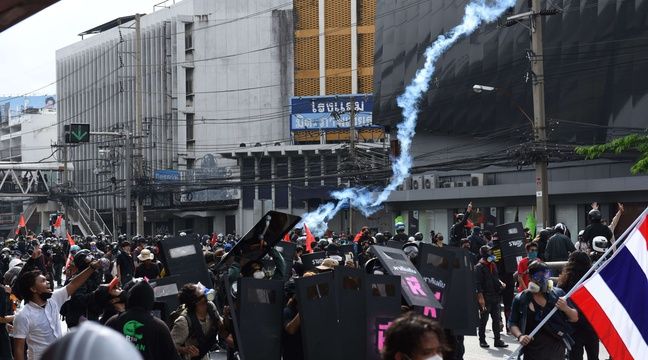 Although the protest has weakened in recent months due to the legal response of the authorities and the pandemic, sporadic demonstrations continue to be organized in Thailand. Police fired tear gas and rubber bullets on Saturday at several hundred people demonstrating in Bangkok to demand political reform and better management of the Covid-19 epidemic.

“Killer government”, “resign”, we could read on the posters, while almost 22,000 new cases of Covid-19 and 212 additional deaths were identified on Saturday in Thailand, a record. The protesters, numbering around 500, clashed with many more police officers.

Protesters criticize the slowness of the vaccination campaign: fewer than 4.5 million of the 70 million Thais received two injections. They ask the authorities to use messenger RNA vaccines such as those from Pfizer and Moderna, instead of the Chinese Sinovac, which is considered less effective against the Delta variant. In the southern province of Narathiwat, dozens of people also took to the streets.

The democratic movement calls for the resignation of the head of government, Prayut Chan-O-Cha, who emerged from a coup in 2014 and legitimized by controversial elections five years later, as well as a profound reform of the monarchy. At the peak of their demands, the abolition of the dreaded article on lese majesté that punishes defamation, criticism and insults against the king and his family with up to 15 years in prison. At the height of the democracy movement last year, tens of thousands of protesters marched through the streets of the Thai capital.