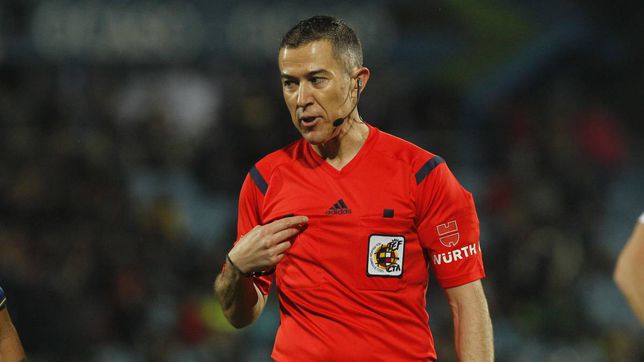 Nacho Iglesias Villanueva, VAR referee during Cádiz-Elche, has published a letter in which he admits his mistake during the match and apologizes. The Galician was in charge of the VOR room together with his partner Díaz de Mera to review all the controversial actions of the party. During the match, he did not review an offside in Ponce’s goal action and that led to the draw and distribution of points between the two teams. Cádiz unsuccessfully tried to challenge the match and a stir has been created in Spanish football due to the biggest VAR error since its implementation. For this reason, and in view of all the criticisms, The braid has decided to show his face with a letter in which he assumes responsibility and is honest with all the fans.

“After what happened in the Cádiz-Elche match on matchday 17 of the First Division League and the subsequent avalanche of comments, criticisms and speculations on this subject, I have felt the need, with the support of the CTA, to write this letter to express my feelings It is simple and difficult at the same time to pronounce these words, as well as obvious and painful: I was wrong.

I don’t feel like using an automaton and hackneyed speech to say things like: we all make mistakes, the players also fail, the coaches… I prefer to write from the absolute sincerity of what I feel and without falling into victimhood since it is something I hate. Y what I feel is anger, anger, pain and annoyance with myself for the mistake made.

I also feel that a mistake serves to tarnish and harshly criticize the work carried out by the CTA and all my fellow referees where professionalism, honesty, demand and self-criticism is the only way to understand our profession.

I am sorry that a bad decision of mine has harmed Cádiz CF and I apologize therefore to the entity and its fans where they have always treated me with great respect. I feel that every weekend, almost daily, the honesty and independence of the referees and their decisions are questioned. Since I dedicate myself to this profession I have never received the slightest suggestion or interference of any kind in this regard. Doubting the latter generates a climate of mistrust and tension that is impossible for the development of our work. I think that no one in Spanish football deserves. And I’m sorry and I don’t understand that this move has been used to talk about and criticize other issues related to the RFEF that have nothing to do with the mistake made and that honestly escape me. I dedicate myself to arbitration and my only interest is to improve and try to do my job well like any worker in any company.

I am an athlete and I accept when I fail and in this case the mistake was mine, no one else’s. The CTA provides us with the necessary means to carry out our work in the best possible way and we have to make decisions. I was wrong, there is no more reading than that.

Finally, I am not in favor of referees talking about plays or explaining our mistakes, but surely due to the exceptionality of the situation, the fans and football this time deserved it. The one who has lost the most in this story is me, but, I repeat, no one can question the honesty of the Spanish referees or mine after so many years of involvement and professionalism”.

War in Ukraine: what to remember from the day of January 26