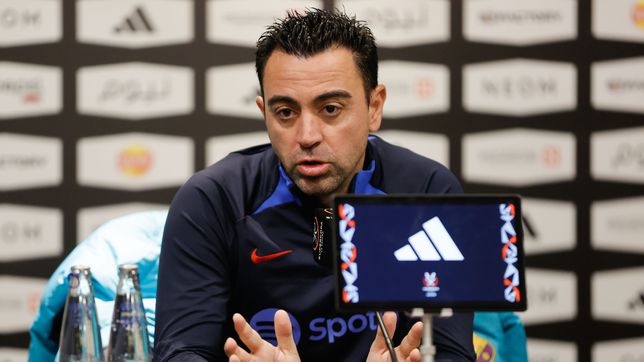 The Barça coach, Xavi Hernandez, spoke this Wednesday in the preview of Betis-Barça in the semifinals of the Super Cup in Riyadh. These were his impressions.

Is Memphis next, is it going?

We haven’t had any meetings and we don’t know anything. I already said the other day that if they don’t touch the squad I’m happy. But the market is until January 31. There are no news that I know of. I have not seen Mateu. If there are news, they will let me know.

Does the sanction affect Ferran?

It’s excessive, once again. It is a struggle, a fight, there is no aggression. But the sanctions will not condition us.

What attracts your attention from Betis?

He likes to have the ball. Channels, Fekir always play. Technically they are very strong. It will be difficult for us to steal the ball from him. And the midfielders are strong, Guido and Carvalho. He is well worked. He suffers without the ball and we will try to have it ourselves.

How important is it to win the Super Cup?

We care about it, of course. And we are motivated. I think we arrived at a good time and we will try to gain personality. We want to be there until Sunday and win the final. It makes us especially excited. It would give us peace of mind. It wouldn’t change much whether we win it or not, but of course, it’s a title. We keep in mind not to make mistakes because Betis is the Cup champion. Betis is a difficult opponent.

Busquets celebrates 700 games with Barça this Thursday. What value does he give him in the team.

Transcendental. It is vital for the dressing room, an example of professionalism, of sacrifice. And footballingly it is the balance of the team. You can tell when it’s there or not. There is a before and after in the defensive pivot. Busquets will be a reference when he leaves. We will tell ourselves if the one that comes is similar or not.

What do you think about there being a Super Cup in Arabia?

We are professionals in this sport, there is an underlying business that we come here and for the good of Spanish football we come. I have a good relationship with Rubiales. There are clubs that are capable of getting out of trouble for money. There has also been criticism for Qatar and it is not a big deal. As in Spain, we have 200 things to improve and we have to look more at ourselves.

What game do you watch tomorrow?

Betis enjoys the ball and they don’t lose it easily. He has a lot of technical quality and one of the best players in Spain. We will try to dominate through the ball, not lose our identity.

As the leader in the League, do you feel the pressure to win this title?

I feel that we arrived at a good moment, without more. That does not mean anything. You have to show things on the field. Betis is a tough rival and I don’t see myself as a favourite.

Do you prepare differently for this tournament?

There is a plus because it would be two games. And you have it to two parties. It would give us confidence and peace of mind. We will compete it. We don’t have a loss but this must be demonstrated on the pitch.

How important is the Super Cup?

We’ll see. It would strengthen us a lot. In case of winning it would reinforce us and if not, it would be a disappointment. We are going to compete at the highest level. Morally, trustworthy.

Raphinha has been a substitute in seven of the last eight games. Does it bother you that you have that condition?

How has Barça changed compared to the beginning of the season?

These days there has been a lot of talk about identity. And what we want is to keep it. And the other day we couldn’t. That is the philosophy. Before, few teams pressed up. And that doesn’t happen now. They already squeeze you, and then that complicates you. And that happens to superteams. There are moments in which the difference is made by Ter Stegen, other times by the defenders. We are in a stage where there is a lot of transition and we have to have correctors. Araújo is special, Christensen is special. Not only is the attack important, but having correction players.

Can Xavi, the coach, change the Super Cup?

I have the illusion and the desire intact. I am here to win titles and if there are no titles this season you are going to kill me. So go for it. I have a tremendous illusion.

Scariolo: “In Vitoria there was a great desire to go up to the next level”