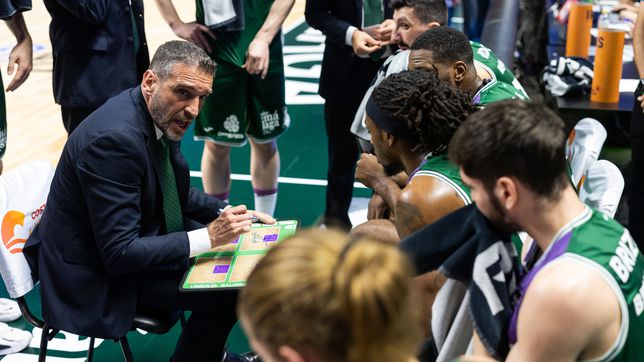 Unicaja has a chance to be seeded in the Copa del Rey. Win in Manresa and expect a loss for Lenovo Tenerife against Betis. The technician considers that this duel is a test of maturity. These are the topics covered by Ibon Navarro.

Absences in the Nou Congost. “In addition to Augusto’s, Dario is not going to travel with the team, he was a father yesterday late afternoon. The most natural and normal thing is for him to be with his wife, with the child and the family. Enjoy it, he is unique. We’ll try to do it without him.”

The change of Manresa. “Last year it was hard playing against them, not only for us, but for many teams. It is a team that has changed many players, it has gained some regularity in what the squad is. You just have to watch the last games, there is a very clear change in trend, at the level of competitiveness. In the last four they have come ahead at halftime and the last quarter, they have lost an extra time in Santiago. It’s much more recognizable now, it looks more like last year. His numbers are better and the sensations too. Going to the Nou Congost is complicated, it is a test of maturity for us and of solidity”.

pace of play. “You know that the things that you do well and that are required of you defensively are going to be in front of us and the same thing happens to them. It’s going to be a very fast-paced game and the rebound is going to be very important, which is what the thermometer tells you. Everyone expects a high-paced game and for sports reasons the opposite can happen, because both teams are afraid of their opponent. Anything can happen, but it is possible that it will be a game that goes beyond 175 to 180 possessions.

waczynskYo. “Adam, we already saw here that he was in very good shape, when they called him we knew it was a very good idea for both of us. Harding is a very important player at the level of possession consumption, it is not easy to arrive and make the numbers that he does. In the end, Dani Pérez’s eight or nine assists are there, the numbers have to feed someone. Sometimes for Harding not to score it is easier to control the one he feeds him. I think the point guards in Manresa are very important”.

Yankuba Sima, another reunion. “It is normal that at any given moment it can affect you. It is also a test of maturity and solidity for Sima. And he doesn’t have to approve it, it’s a matter of experience, of going through and learning. For me it’s beautiful because I was there for two years and a lot of people who worked with me have stayed there, also many fans. That’s small and you see them every day, it’s always nice to come back”.

Your adaptation. “He understands the defensive system more and more, our way of playing is good for him to exploit his speed, his mobility and his way of running. He has a better 5 meter shot than he showed the other day. Being very different from Augusto, he will help us in other things, what Gus (Augusto Lima, who will undergo surgery in Madrid this Saturday) did, we have to do together, Yankuba and LeBron James will not fix it, because Augusto alone there is one. You have to try to get the most out of him and that he is involved. If he improves, the team improves.”

Balance without BCL matches. “We would have liked, these weeks without a match, to have taken advantage of them to improve things, due to injuries and illnesses, because this has been the only time we have been able to take advantage of to do that. A different rhythm starts, now it’s one match after another. It is time to take care of the workloads, be very careful and, let’s cross our fingers, with the trips and try to avoid injuries as much as possible. Continue being us, a long rotation, control everyone’s fatigue and continue playing as we have done up to now”.

Luke Fischer, out against Lenovo Tenerife