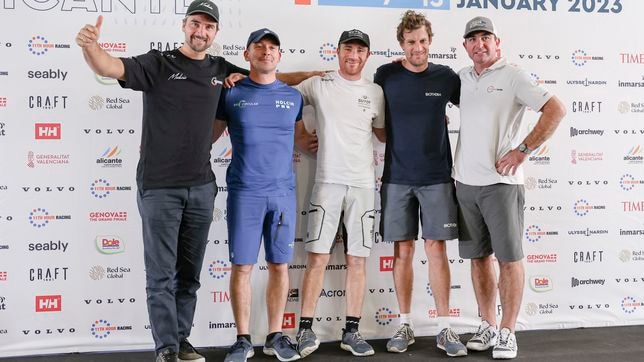 The 14th edition of The Ocean Race it is ready to go. This Sunday the departure will be lived from Alicante and there is a desire to see the five IMOCAs sail around the world. Without a doubt, it is a long-awaited edition, as can be seen from the number of sailing fans who have been seen in the Ocean Live Park in the last few hours, and it is that it will be historic because they will live the longest stage in history from The Ocean Race: 12,750 miles from Cape Town (South Africa) to Itajaí (Brazil). The stage is scheduled to last about 30 days in which the IMOCA fleet will dive into the Southern Ocean and Benjamin Dutreux, co-skipper of the GUYOT environment-Team Europe (a team in which the Spanish Olympic champion Támara Echegoyen competes), commented that “I have never spent 30 days on board with a crew in my life”.

“I think Stage 3 will be particularly difficult as the key will be knowing when to slow down and when to push hard. We may end up sailing 70 percent of the time on autopilot; is certainly a great question. From the viewer’s point of view, the course looks like it will be a long descent to South Africa, the fight for survival to Cape Horn and a long climb to reach the finish line in Brazil”, explained 11th Hour Racing Team skipper Charlie Enright. Of course, not all the skippers agreed on defining which stage would be the most difficult: “Surely Stage 3 will be difficult because we will go down to the south, but three members of our crew have already been there sailing alone in an IMOCA. For us, Stages 1 and 2 will be the most difficult. We haven’t done any training together for this regatta, the first time we sailed as a crew was a week ago, so we will be figuring out how the five of us need to work together on board the ship,” said Biotherm’s Paul Meilhat.

The challenge of sailing with a full crew also produced somewhat unexpected responses. While the benefits of being able to share the physical load to control the boat and maintain speed are clear, experienced solo skippers highlighted the added pressure that sailing fully crewed can place on them. “When you sail alone you don’t usually get stressed, since you can do things at your own pace, but as a skipper you have a series of responsibilities with the crewso I expect to feel more stress at the beginning,” Meilhat said.

But in Alicante, not only will the IMOCAs be on the starting line because six VO65 they will also start with the aim of competing in three stages of this The Ocean Race. Stage 1 will also take them from Alicante to Cape Verde and, after winning the In-Port Race last weekend, the Windwhisper Racing Team with the Cantabrian Pablo Arrarte in front will be the ship to follow. “All the teams are very good and having that regatta as a training session was great, but we signed up quite late and have been training every day we could, so I hope it goes well for us.”

POCO X5 Pro: what to expect from the next cheap Xiaomi