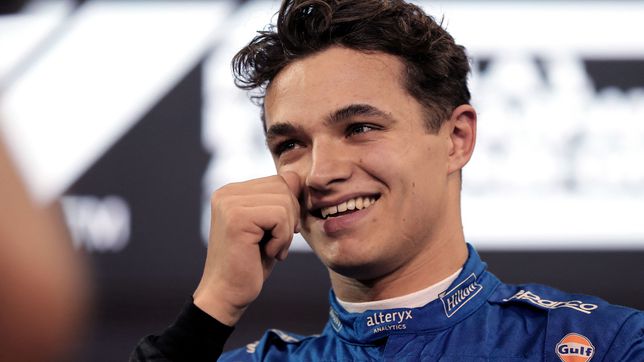 It has always been a topic of the most taboobut fortunately The importance of mental health gains more weight in society every day. And the fact that more and more athletes accept help of this caliber serves as an example for the younger generations. The paddock of Formula 1 is one of those places where more and more drivers are encouraged to talk about the subject openly. The past 2022, Lewis Hamilton acknowledged having problems alleging that “some days it is difficult to stay positive” and that requires “a constant effort” that ends up exhausting “mentally and emotionally” those who suffer it in their flesh. The seven times world champion even he was forced to disappear for a whole winter, after putting an end to 2021. A year that he described as “very hard with so many things that were happening around him.”

Now it’s been Lando Norris, McLaren driver, who has not been shy about talking about his most personal situation. The British, in an interview with GQ magazine, admits that he suffered from mental health problems in his early years in Formula 1, moment in which he came to lose all confidence in himself and where he even raised his talent to be in a World Cup of this nature. The 23-year-old pilot made his debut in the great circus last 2019 and, although now it turns out to be one of the happiest and funniest characters in the paddockHis beginnings were the hardest. He assures that during that season He came to suffer a lot of anxiety that, at first, he came to hide. With help and a lot of work, three years later he dares to speak openly about the subject and understands that you can’t always please everyone. “It was a choice to talk about it, because I struggled with it quite a bit in 2019 and 2020,” Norris explains to the publication.

“I just didn’t know how to deal with it. I kept it all in and it really hurt my self-confidence, which hit an all time low.” he adds, aware that keeping everything for a while was not his best choice. In fact, he says, that very thing caused him to lose his confidence to the point of doubting the talent that took him to the top of motorsports. “I doubted myself. Am I good enough to be in Formula 1? Can I come back from this?”, he reveals, now happy to know how to deal with the criticism that constantly comes: “You’re never going to please everyone, there are people who support you and people who don’t, I know I’m doing the best I can”.