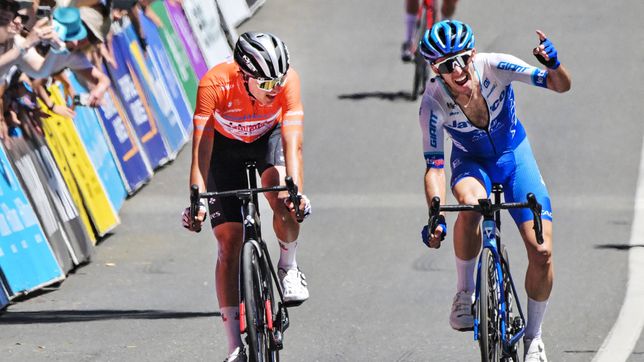 Its history is known, but it should be remembered. After serving in Continental category teams, Jay Vine reached the highest elite through virtual cycling. He was proclaimed champion of the Zwift Academy Race and, with this, he won a contract to run with Alpecin. From then to today, to his first overall victory in a World Tour race, with the UAE Team. To be crowned in his house, in a Tour Down Under dominated with solvency, without needing partial victories: in the third stage he put on the leader’s jersey, ocher color, and never let it go. Simon Yates (Jayco), second overall and winner of the last stage, tried to the end, but without success. Two kilometers from the finish line, the Brit launched his ordeal, a powerful attack that could only be followed by Ben O’Connor (Bg2R)… and Vine himself, surpassed in the sprint, but with the general well tied. Along with them, on the podium, an excellent Pello Bilbao, who leaves Oceania with his first victory (third stage) and the first Spanish podium of 2023. It is a sure thing. He is always.

“It’s incredible to be here with this winner’s jersey. The race control was first class, the team was amazing with their support all week and I’m very happy to get the job done. It’s very satisfying,” declared Vine as the winner, the ninth aussie in the history of the round and the first since Richie Porte, in 2019. “We came here with a lot of ambition. We didn’t stay with the general, but we can be very happy with the stage”, valued, for his part, Yates, who scratched seconds with the bonus, but not enough. In front of him, he had a wall that every time seems taller. An exciting runner project. Vine is 27 years old, but he may have hit the elite just at the right time. Since last season he achieved two victories in three days in La Vuelta, both in mountain days and with unprecedented climbs, expectations about his chances have risen substantially. Next to Tadej Pogacar, it seems that he will be able to keep up with him. At the moment, he climbs them like few others.

In the Adelaide Hills, he had to tackle a 112.5km loop with five climbs of Mount Lofty, 1.5km at 6.8%. At each lap, an opportunity for his pursuers, nervous and active, like the entire peloton during the week, full of alternatives and crashes, favored both by the conditions (a lot of wind) and by the intensity. We have to start the year strong. “The start was very electric, with many attacks, with many riders thinking that it was their last chance to do something in the race, we had to be very attentive all day,” Jay analyzed. Many breakaway attempts, with a vintage Michael Matthews to ensure his regularity jersey, but not very disturbing for the UAE rider, who he controlled with serenity. 10 kilometers from the end, the peloton was reunited; at 1.8 from the finish line, Yates jumped. Behind him, a Vine with a message: it is also prepared for stage races. “All I want to do now is have a drink,” he joked when asked about his next goals. They will be tall.

Stage 5 Tour Down Under

General Tour Down Under