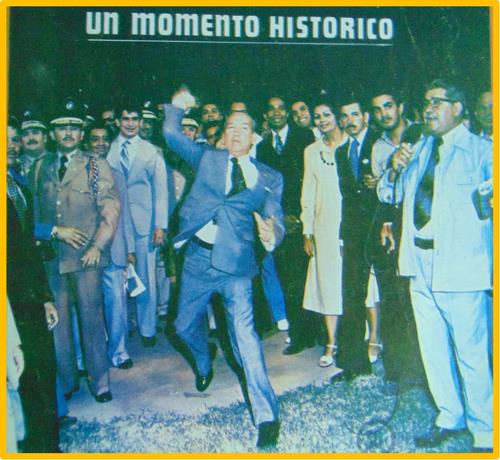 No Dominican had made it to the Cooperstown Hall of Fame. There was no cable TV. Only four teams made up the Dominican Baseball League. The Cold War between the United States and the Soviet Union was at one of its hottest points.

The world and the country were very different in 1980, the last time before now that the Tigres del Licey and the Estrellas Orientales met in the final series to decide the Dominican representative for the Caribbean Series.

There were no cell phones or computers, the telephones were residential, disk and the public keys and worked with coins, the dollar was worth around 10 cents more than the Dominican peso.

Licey, Estrellas, Águilas and Escogido were the teams. Three years later, with the controversial and for some illegal Expansion Law, the Caimanes del Sur (San Cristóbal) and the Azucareros del Este (La Romana) arrived.

It was the second year of the presidential term of Antonio Guzmán Fernández. Since then, eight presidents have directed the destinies of the Nation. A year earlier, Hurricane David had struck (August 1979). Trips in yola –illegal emigration- began to increase. The tragedy of the Regina Express is also remembered – the death of several stowaways.

The Dominican Republic had not debuted as a medalist in an Olympic Games. It would be necessary to wait 4 years (Los Angeles, 1984) for Pedro Julio Nolasco to achieve bronze in boxing. In the professional, Roberto Durán won his first fight against Sugar Ray Leonard.

In 1980, the United States boycotted the Moscow Olympics, demanding the withdrawal of Soviet troops from Afghanistan. The Dominican government joined the boycott, but the Dominican Olympic Committee – through public collections – was able to send a delegation to the Olympic event.

Merengue began its golden decade that led him to be nominated for the first Grammy (Bonny Cepeda, Noche de Discotheque, 1985) and in the end saw the emergence of the Creole musical figure who would transcend borders: Juan Luis Guerra. The Noon Show was the most popular TV show, Jack Veneno (wrestling) the most followed figure

It was the year that a rookie named Magic Johnson led the Los Angeles Lakers to win the NBA in the birth of the so-called “Showtime”, but the Rookie of the Year was Larry Bird with the Boston Celtics.

The closest thing to “Google” was the LISTÍN DIARIO’s Línea Directa column. On the page next to the editorial, questions from readers on the most varied subjects were answered. Although the most sought after was “La Cámara la Vio Así”, by photographer Leopoldo Perera Acta for Ultima Hora and Ahora magazine. The “Twitter” -the fastest way to find out the news- were the transmissions “from the scene” made by the radio news programs (Radio Mil, Radio Popular, Radio Comercial, among others). To see something similar to “Youtube” we would have to wait until 1981 when Telecable Nacional emerged and MTV was also founded.

There were eight years to go before the first Dominican arrived in the NBA: Tito Horford (1988, Milwaukee Bucks). Now his son (Al Horford) is on track to finish off a league career that could induct him into the Basketball Hall of Fame in Springfield. San Carlos achieved the third of its five crowns in a row in the top district tournament thanks to its “Twin Towers”: Evaristo Pérez and Vinicio Muñoz.

There was still a long way to go before the capital had the lifts and tunnels in its center and much more for the operation of subways and cable cars. ONATRATE’s shell cars and buses reign in transportation. The capital covered the entire area from Boca Chica to La Victoria and Los Alcarrizos and a single trustee was in charge of collecting the garbage. Of course the population of the country was about 5.6 million people.

By the end of the 1980 Major League season, there had been 69 debuts by Dominicans in the Major Leagues, a figure that was “dangerously” close to the thousand that should be reached in two or three more years. And there were five years left for a Creole to earn a million dollars a year.

At that time, most of the newspapers –with the exception of El Caribe and La Información-, reported a price increase: five cents. The television channels were counted with little more than the fingers of one hand.

The massive practice of the sport was concentrated in the Juan Pablo Duarte Olympic Stadium. More than 20 years later, the construction of the sports buildings in the Parque del Este would begin with a view to holding the Santo Domingo 2003 Pan American Games.