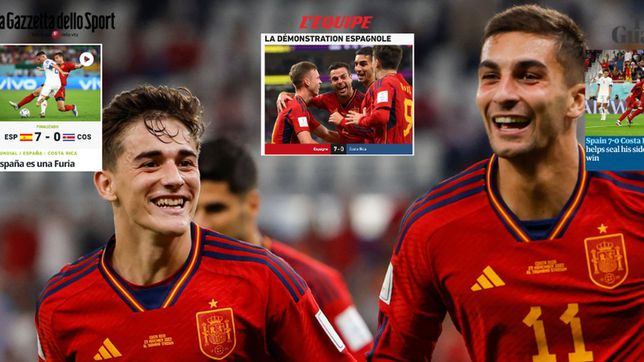 The performance of the Spanish team has raised exclamations in the international press. In Germany, the next rival of Luis Enrique’s men, they have opted for more informative headlines, but it is the Bild that generates the most uncertainty for its fans after the defeat of their team against Japan: “How are you going to stop these Spaniards? Help Hansi!”. Gavi and Ferran, the most applauded.

The Andalusian, who has entered the podium of the youngest scorers in a World Cup after Pelé and Rosas, has not gone unnoticed. The BBC he points out as the most outstanding (“The adolescent Gavi stars in how Spain hits Costa Rica”) and The Telegraph underlines his record (“Gavi is the youngest to score since Pelé while Spain scores seven”). However, it has been Ferran, who has scored a double, who has been the protagonist in Guardian (“Ferran’s double leads Spain’s ride in Qatar”).

“La Roja arrives at the World Cup in an armchair!”

In France they have also highlighted the result of the national team. Though le parisien has focused on the Germans (“Spain beats Costa Rica and puts pressure on Germany”), L’Equipe Y RMC have highlighted the level of those of Luis Enrique (”The Spanish demonstration”, “La Roja arrives at the World Cup in an armchair!”respectively).

The southern European neighbor has translated the goals into fear for the level that the Spaniards have shown. From the “Spain, exaggerated: 7 goals against Costa Rica!” of La Gazzetta dello Sportto the “Spanish fury of name and fact: Spain thrashes Costa Rica” La Repubblica. Without forgetting the “Spain scares rivals: it makes 7 to Costa Rica!” of Corriere dello SportY “Luis Enrique’s Red is scary” of tuttosport.

Germany, focused on the next game

After losing 1-2 against Japan, the Germans have the next match against Spain surrounded on the calendar, a rival to beat to be able to advance to the next round. “Before the classic against Germany: Spain beats Costa Rica 7-0” and “Spain, the next German opponent, dismantles Costa Rica” have been the bets of kicker Y spiegel, respectively. Nevertheless, Bild He wanted to make his fans nervous: “How are you going to stop these Spaniards? Help Hansi!”

“Spain shows that it is a candidate”

In olé Luis Enrique’s live shows on Twitch have not gone unnoticed (”Let’s shake! Spain stomps on the debut”), and in Clarion they have not forgotten the coach either (“Spain has no secrets and dances to the rhythm imposed by Luis Enrique: possession, commitment and intensity”). ESPNFor his part, he shoots for ‘fury’ (“Spain boasts of ‘fury’ in its debut and thrashes a weak Costa Rica”).

In addition to the memes for the heavy defeat, the Ticos have pointed out the performance of their team as one of the causes of the result: “Costa Rica suffers the worst beating in history; The hardest thing is that it was a team without a soul against Spain ”, of The nation; “Most beautiful quiet: from going for the world title to the worst ridiculous in history” by Columbia Radio; and “Spain strikes the heart of Costa Rica with a humiliating rout”, by Channel 7.