O substance use disorders (CSD) are diseases that affect a person’s brain and behavior, which influences their ability to control their urges to use certain drugs. These include legal ones such as alcohol or tobacco, but also illegal ones such as heroin, ecstasy or methamphetamines.

In Spain, according to data from the Spanish Observatory on Drugs and Addictions (OEDA), 93% of the population aged between 15 and 64 have already consumed alcohol at some point, which makes it the psychoactive substance with the highest prevalence of consumption. Tobacco follows with some distance, with 70% of Spaniards having smoked at least once.

In rare circumstances, some injuries, such as a stroke or stroke, can cause these addictions to suddenly disappear.

In rare circumstances, injuries such as a stroke or stroke can cause sudden disappearance of these disorders. Studying this unusual phenomenon, researchers at the Turku Brain and Mind Center (TBMC) in Finland have recently identified a brain circuit related to the remission of these vices, as published in the journal natural medicine.

“Until now, we did not know in which areas to target treatments, but this discovery could solve this limitation by pointing to a common network for several addictions”, tells the neurologist to SINC. Juho Joutsafirst author of the study.

And how can drug addiction disappear after an injury? “An addiction is a learning process that is triggered in our brain, so damage in this area can induce the loss of some previously acquired behavior,” she explains. Adriana Castro Zavalamember of the Behavioral Neurobiology Research Group (GReNeC) from Pompeu Fabra University (UPF).

The researcher gives as an example people who, after suffering a stroke, lose the ability to walk or speak, to remember certain periods of their lives, to play an instrument or speak a specific language, among other situations.

In search of therapeutic targets

By locating the patients’ lesions, researchers at Brigham Hospital in the USA – who are participating in the work together with specialists in Finland – linked smoking remission to specific areas of the brain and not to regions, as previously thought.

According to the authors, damage to these areas (such as insula or the cingulate gyrus) change the pathway involved in remission of nicotine dependence. On the other hand, the impairment in the connection profile, observed in other patients, did not make them stop smoking.

By looking beyond brain regions, we have found therapeutic targets and are eager to test them.

“By looking beyond individual brain regions, we have found therapeutic targets to combat addiction and we look forward to testing them in clinical trials and improving existing therapies.” michael foxfrom the Department of Neurology at Brigham Hospital.

How was the study carried out?

The experts analyzed brain images from two independent groups of 129 brain-damaged tobacco addicted patients. Of these patients, 34 were suddenly free of tobacco addiction, so the authors decided to compare injuries of patients who were unable to stop smoking versus those who were after the injury.

During this comparison, they drew a map brain to locate each lesion. Their research reveals that while the damage associated with remission occurred at multiple locations in the brain, they can all be attributed to a specific brain network.

Likewise, they also found that “the reduction in alcoholism corresponds to a similar brain circuit, which suggests that this finding could be applied to other addictions,” explains Joutsa. 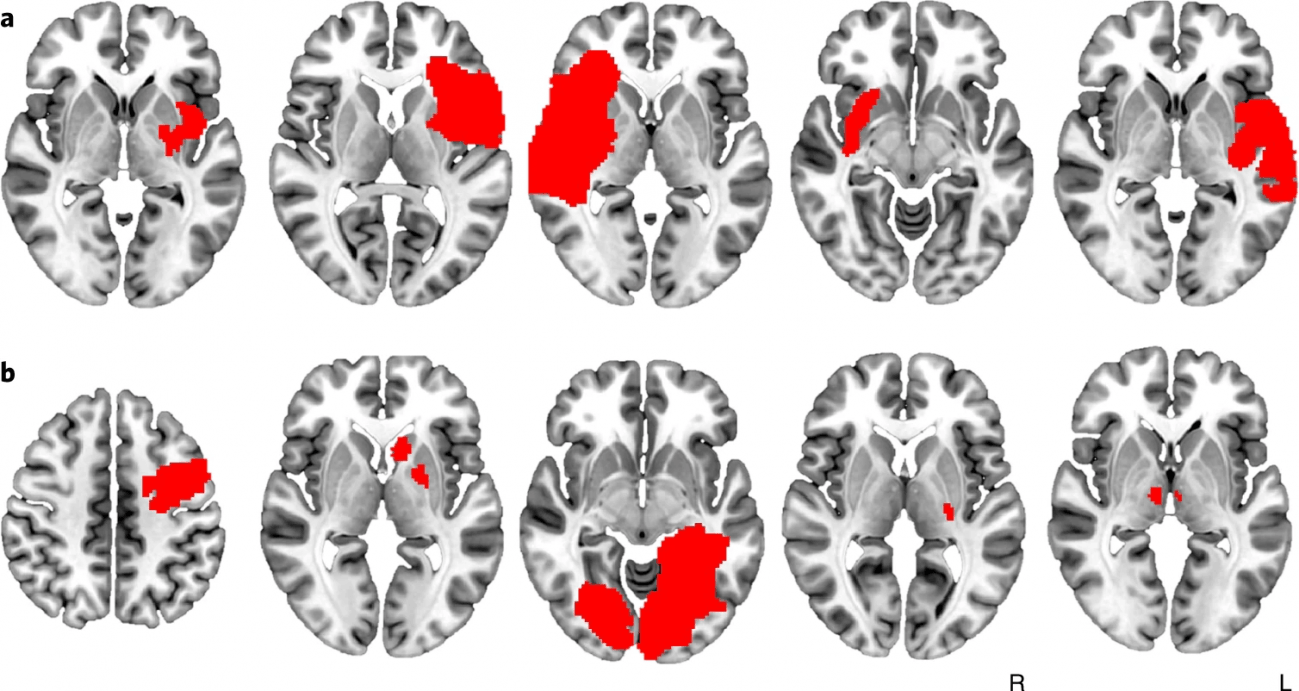 Some lesions (in red) associated with addiction remission passed through the insula (a), but many did not (b). /Nature Medicine

The authors advocate validation of their findings through clinical trials and a review of other substances to determine whether their results can be broadly applied. In addition, they claim that more research is needed, particularly on the possible side effects that may be associated.

“Potential side effects depend on the methods used to stimulate brain circuits, so they need to be investigated before translating these findings into clinical treatment. Non-invasive techniques, for example, make it possible to temporarily modulate this circuit to investigate these problems”, comments Joutsa.

There are more factors to consider: environment, social integration, type of drug, time of use, age of onset or sex/gender.

“The injuries addressed in this research may have caused the loss of some other function, in addition to the areas related to substance dependence. By this I mean that there are more factors that must be considered: the environment, social integration, type of drug, time of consumption, age of onset or sex/gender”, says Castro-Zavala.

The Spanish researcher believes that this discovery “will facilitate and favor the understanding of something as complex as an addiction. However, this does not mean that we are already facing the end of this pandemic that has affected us for decades.

The 10 Healthiest Herbs and Their Benefits – EcoPortal.net

June McCarroll, the woman who crossed the line

Dyslexia was fundamental to the evolution of our species