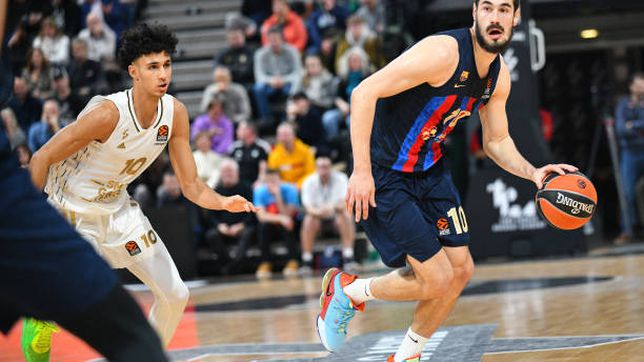 Barça was warned by the defeat in Barcelona, ​​because ASVEL is a seasoned team and because Fall is always a danger. And he cost the Catalans, who had to use individual talent to resolve the ballot against ASVEL. They chained phases of good play with others, at the beginning of the quarters, much more gray. But it was Abrines, Mirotic and Higgins who sealed the victory. The first with a series of triples that allowed Barça to take a small income, the second with his contribution throughout the match and the American appearing, as he likes and is accustomed to, in the final minutes. Barça did not stumble in Lyon, even though they found many stones along the way: ASVEL signed a remarkable match despite their numerous casualties.

Eight minutes into the game, Jasikevicius’ patience lasted. The same time it took ASVEL to get ahead (11-13) and enough to detect the problems of the Catalans at the start. Without Satoransky the team suffers and the start in Lyon was another demonstration. He suffers because he does not have the clairvoyance that the Czech provides in the direction of play, but also because Laprovittola goes to one and loses effectiveness. He also suffers in defense, where neither the Argentine nor Jokubaitis match Sato’s performance. Barça did maintain a remarkable competitive level, especially in defense, but towards the end of the quarter the area set up by ASVEL caused them many problems to score. Mirotic was wrong and from 6’75 Barça as a whole was a disaster. Faced with the threat that Fall poses from the inside, they shot 10 triples in the first set. They put one

Despite the loss of De Colo, who decided the Palau game, ASVEL was very compact. He caught the lack of blaugrana skill at the beginning of the second quarter, but continued to fight in defense. Fall’s absence, however, allowed Sanli’s first points and a penetration by Higgins (17-18). And, more important still, the triples began to enter. First Jokubaitis, but above all Abrines. Eleven practically consecutive points for the Balearic Islands, with three triples, increasing Barça’s account. They were the best minutes for the Catalans, who put land in the middle (33-42).

The rent of nine points lasted Barça for two minutes. A partial 0-9 for the French as a result of errors in defense and attack by the azulgranas, who fell asleep after the break. The worst possible start to the fourth, because if the numbers were bad the feelings were worse. Fall kept adding and, ASVEL as a whole, dominating. Jasikevicius’s face was a poem because if something bothers the Lithuanian coach it is defensive passivity. And of it the Barça sinned.

With the passing of the minutes, and the participation of Mirotic, Barça began to add. And as his coach likes, from the defensive seriousness. Two blocks, steals, defensive efforts that allowed the Catalans easy baskets. Just what they needed. The negative part, the elimination of Sanli with 12 minutes to play and that ASVEL was far from out of the game (60-63).

A triple from Risacher made it 71-67 in the electronic with five minutes to play. A world in basketball, but a lot of work ahead for Barça. Stopping Fall, equalizing the intensity, defending direct blocks better, and finding a way to damage ASVEL were all unfinished business. Lots of homework and little time.

And they managed to make Fall uncomfortable, they improved intensity and defense, but above all they found a way to hurt ASVEL. Well, specifically found by Higgins. Eight consecutive points, without a mistake from personal and absolutely decisive, which ended up decanting the game.

iPhone 12: this great deal on the Apple smartphone will not leave you indifferent

Hotel in Miches will show Taino culture and DR traditions